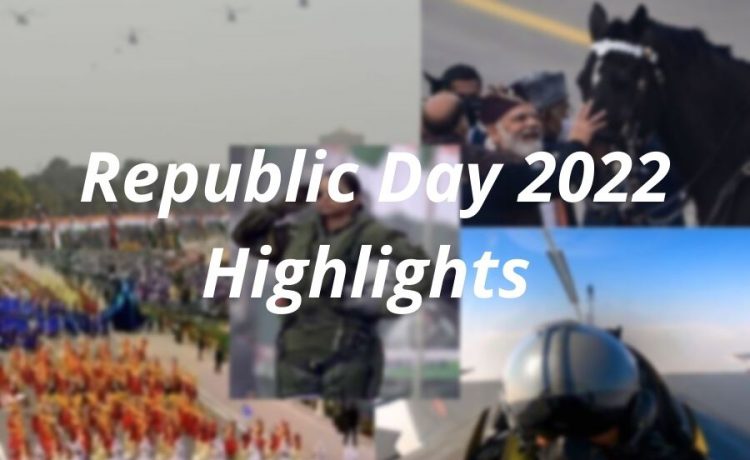 Between Flight Lieutenant Shivangi Singh, India’s first woman pilot to fly the Rafale fighter jet and Virat, the President’s Bodyguard Commandant’s horse who retired after 13 years in service, the 73rd Republic Day parade was unlike any the country had seen before. Today’s event was an eclectic mix of ceremony and grandeur and several firsts too. Here is a look at what happened when India turned out to celebrate its Republic Day with all fanfare and patriotic fervour –

The Firsts on Rajpath

The country saw for the first time a grand flypast by 75 IAF aircrafts and helicopters, performance by 480 dancers selected through a first-ever district-level Vande Bharatam competition, and a “Shaheedon Ko Shat Shat Naman” tribute by the NCC, displayed on large LED screens. Owing to the Covid protocol, only children of 15 and above age, who were single-dose vaccinated and double-vaccinated adults were allowed at the parade. For the same reason, there was no foreign contingent this year.

Flight Lt. Shivangi Singh became an inspiring figure for women all over India by being a part of the IAF’s tableau at the grand annual parade. The tableau’s theme was “The IAF Transforming for the Future.” The tableau displayed models of Rafale, MiG-21 as well as 3D surveillance radar Aslesha MK-1.

Virat, the black horse who took part in 13 Republic Day parades during his years-long service as part of the Presidential guard, retired on Wednesday. He was the mount of President’s Bodyguard Commandant Anup Tiwary and had become the first horse to receive commendation on Army Day this year for his exceptional service. President Ram Nath Kovind, Prime Minister Narendra Modi and Defense Minister Rajnath Singh were seen patting Virat lovingly before he was bid farewell after the parade.

At the R-Day rehearsal on Tuesday, the eve of the Republic Day 2022, hundreds of drones made different formations against the facade of Rashtrapati Bhawan. The rehearsal was for the first-ever unique drone and laser show, which will be shown during the Beating Retreat ceremony to be held on January 29.

A one-minute video of the grandest fly-past on the occasion of the 73rd Republic Day induced goosebumps among the netizens today. It was shared by A. Bharat Bhushan Babu, the principal spokesperson of the Ministry of Defence on Twitter. The video showed stunning footage, including a cockpit view, of the fly-past performed today.

Venus, Mars, Jupiter, Saturn to align in straight line this week after 1000 years

Venus, Mars, Jupiter, Saturn to align in straight line this week after 1000 years