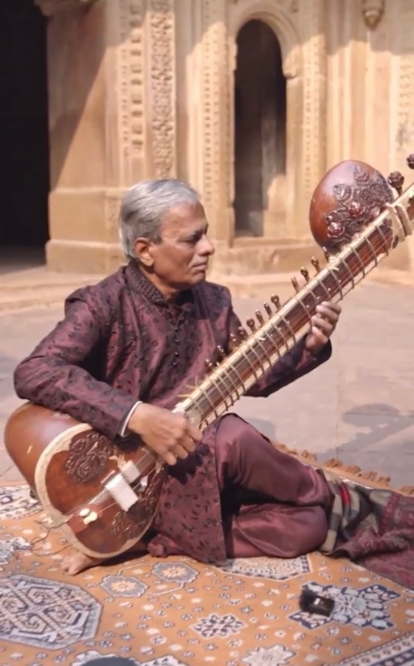 From time immemorial, the healing power and valor of music have been recognized by Indian culture. It is said that when the musical prodigy Tansen sang raga Megh Malhar, the sunlight would diminish and clouds would ensue causing pouring rain. And when he sang raga Deepak, candles and lamps would light up magically.

Music has always been viewed as a tool of therapy and creation, especially Indian Classical Music that requires lifelong training and practice. Gwalior – a town known for its rich musical history – first received recognition when Tansen, who belonged to Gwalior thrived in King Akbar’s court as one of his nine jewels. Over the many centuries that have passed, Gwalior has continued to produce and put together not only the country’s but also some of the world’s most renowned musicians. From Haddu Khan to Meeta Pandit, the list is endless.

But with the increasing access and influence of the West, the younger generation seems to have lost touch with Indian Classical Music. We are moving away from our culture and have forgotten to appreciate the diversity that our country has to offer. And with Amrutam rooted in Gwalior, we thought there was certainly something we could do about reigniting that spark and reintroducing the magic of traditional music!

And thus, came to life the Amrutam Raga Project – a docu-series featuring seven local musical artists from Gwalior Gharana shedding light on their art, journeys, challenges, and what keeps them going on this never-ending path of being a lifelong student of music.

Also see: What does Ayurveda say about Self-Love?

When asked what inspired this project, Agnim Gupta, Principal: Tech & Growth, Amrutam says, “Stuti and I are both trained in Hindustani Classical Music. I am a trained violinist and Stuti has learned kathak and vocals. We started from a very young age and hence, music has always been an integral part of our lives.”

As kids, both Agnim and Stuti were made aware of how detailed and rich Indian Classical Music was. They would often brainstorm and discuss their ideas and were deeply inspired by their early years of training.

“I think local art and music represent particular geography, culture and the people. You can learn more about the people and their culture by learning about their art forms, folklore, music,” adds Agnim.

So, when the resources and tools came in handy, they decided to do something about it. “Initially, we thought of curating a playlist on music platforms but the idea evolved when Chinmay met us and proposed the idea of recording the music and creating a storyline, sort of like a documentary on the lives of the musicians,” explains Stuti Ashok Gupta, Principal: Brand & Vision, Amrutam. With the AmrutamRaga Project, their vision is to be able to document artists and their art to preserve our rich culture and heritage in a certain way.

Read more: Rediscovering Self with Amrutam – A Mental Health Podcast

But one might wonder, why would an Ayurvedic Lifestyle Brand and Wellness Community make a musical project? Well, the answer lies in the intent.

“Amrutam in itself is an entity. It is vast and has different elements to its personality as a brand. And considering Amrutam belongs from Gwalior, it was a great opportunity to amalgamate Indian Classical Music, Gwalior’s culture and Amrutam’s resonance with the same,” says Stuti.

To put it simply, Indian Classical Music, Ayurveda and Spirituality are essentially extensions of each other and cannot be separated. Each of them requires constant practice and has been passed on from generation to generation. The value of what our elders taught us can be found when we put our mind to learning the nitty-gritty of these art forms.

But the making of this project wasn’t devoid of the many challenges that the Team faced. Firstly, the task of taking out the time to do something like this – create something that does not generate any revenue was really strenuous. Then came the hassle of identifying and interviewing the right artists, finding the right platform to publish it on, and ensuring that the hard work reached the right audience.