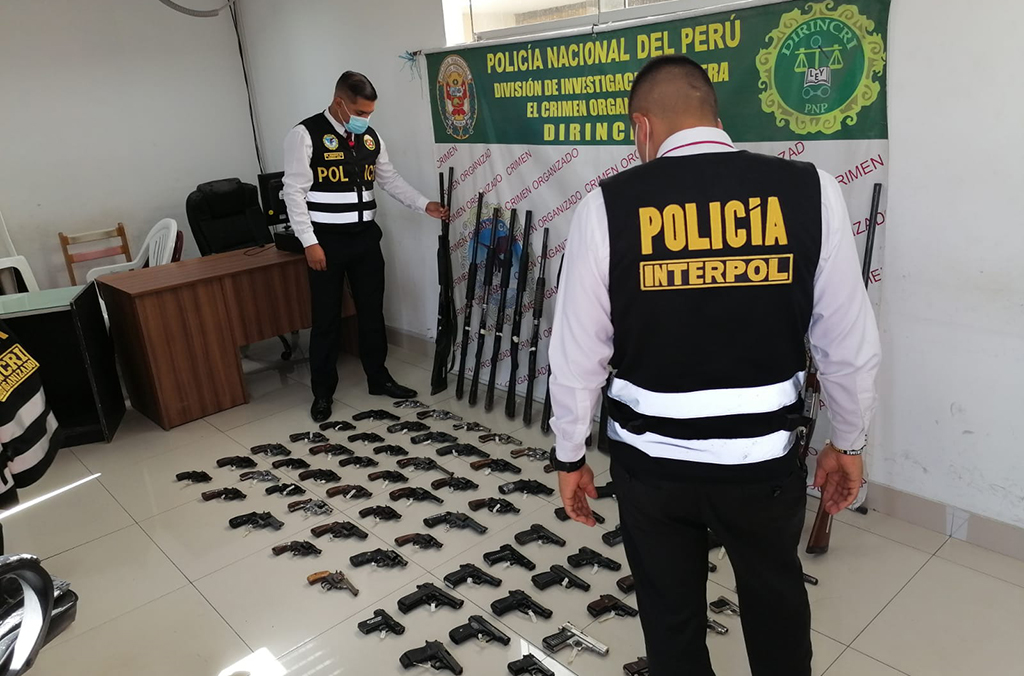 Around 4,000 suspects were arrested from across all 13 South American countries and some 200,000 illicit firearms, parts, components, ammunition and explosives were recovered from them, Interpol said.

Interpol, the International Criminal Police Organisation that enables police in 194 member countries to work together to fight international crime, in coordination with United Nations Office on Drugs and Crime (UNODC) carried out weapons trafficking detection in 13 South American countries.

Over three weeks, from March 8 to March 28, Operation Trigger VI witnessed hundreds of thousands of people and vehicles were searched at suspected hotspots and air, land and sea borders across the region.

Coordinated by Interpol and the UNODC, the joint operation enabled police, customs, border and prosecution services to work together, carrying out nearly 10,000 checks against Interpol databases to track illegal firearms and identify potential links with organized crime.

Whilst investigations continue across the region, initial results and highlights include Uruguayan arrest of members of a gang using social media to promote violence by posting photographs of themselves flaunting illegal guns.
Seizure in Peru of large amounts of ammunition arriving from the Brazil-Argentina-Paraguay tri-border area, and arrest of two US-wanted fugitives the subject of

Chilean arrest of a Colombian national wanted through an Interpol Red Notice for firearms trafficking and serious drug crime.

Detection of the illegal sale of 90,000 pieces of ammunition, with investigations expected to lead to arrests in the days to come.

“Operation Trigger VI has seen thousands of illicit weapons taken out of the hands of criminals and is testimony to the commitment of South American law enforcement despite the challenges of a global pandemic,” added Secretary General Stock.

With firearms trafficking intrinsically linked to a wide range of other serious crime, results also included:

Police forces in Brazil’s 27 states and the Brazilian Federal Police confirmed the clear link between firearms trafficking and fraud, including the sale of counterfeit guns between gangs.

Seizure by Brazil’s Army and Federal Police of more than 60 illegal firearms at a dealership suspected of using counterfeit documents to divert firearms and ammunition. Officers arrested the man suspected of heading the counterfeiting and smuggling network.

Destruction of 27 cocaine labs across Bolivia including one at a reserve in the Gran Chaco region on the Paraguayan border with a camouflaged runway for small planes and sophisticated telecommunications systems.

Rescue of 33 suspected human trafficking victims thought to be from Haiti during a firearms raid at La Paz bus terminal.

Collective seizure of more than 21 tonnes of cocaine, marijuana and precursor chemicals.

Countries targeted suspects, networks and locations based on intelligence collected ahead of the operation.

Officers across the 13 countries simultaneously checked firearms against Interpol’s iARMS database to determine if the weapons had been reported as lost, stolen, trafficked or smuggled. With over a million records, iARMS enables the identification of firearms trafficking patterns and smuggling routes.

“By providing training and fostering cooperation as part of Operation Trigger VI, UNODC was pleased to support South America’s criminal justice systems’ responses to firearms trafficking and its links to organized crime. This is in line with our Office’s role as the guardian of the UN Convention against Transnational Organized Crime and its Firearms Protocol, the only legally binding instruments addressing transnational organized crime and illicit firearms trafficking at the global level,” said UNODC’s Executive Director Ghada Waly.

“It is vital for UNODC and Interpol to join forces to ensure countries develop the capacity and tools to tackle firearms trafficking both on the ground and in court,” added the UNODC Executive Director.

Pre-operational training delivered jointly by INTERPOL and UNODC ensured that officers and prosecutors had the skills needed to detect, identify, investigate and prosecute firearms crime holistically, with each firearm considered as part of a larger, connected scheme.