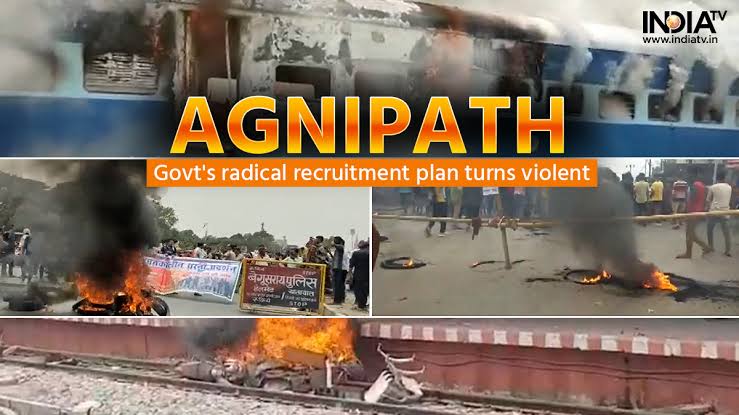 The Government of India was seen busting myths over the Agnipath recruitment scheme even as violent protests shook up parts of Rajasthan, Bihar, Madhya Pradesh and Uttar Pradesh. In Bihar alone, protestors went berserk and ended up burning trains, offices, private vehicles on the road. Ever since Prime Minister Narendra Modi’s Cabinet Committee on Security (CCS) approved the roll out of the ambitious recruitment scheme for the country’s defence services, India has seen a conundrum unravelling at various places regarding the relevance, authenticity, and need of this recruitment scheme.

The CCS, on Tuesday, launched the Agnipath scheme, offering Indian youth an opportunity to serve in the regular Armed Forces cadre for a duration of four years. However, the regular aspirants to the armed forces are apparently unhappy with the new scheme, which introduces changes in the length of service, no pension for those released early and the age restriction of 17.5 to 21-year, as the last bit would make quite a few of them ineligible.

However, amidst the growing cacophony over this decision of the Centre, there are voices that have come out in support of the scheme. Political commentator Dr. Anand Ranganathan has said in this regard, “I support Agniveer scheme because – chiefs of all three wings of our armed forces are supporting it; across decades, I cannot think of an instance where our chiefs knowingly took a decision, not in the interest of the nation.”

The government is also making an effort to clarify the intent of this scheme and it has been clarified that the future of the ‘Agniveers’ (recruits) under this scheme would be as stable as those of the regular selected candidates. In this regard, while talking to a news channel, Additional Secretary (Military Affairs), Lt. Gen. Anil Puri made an emotional appeal through the television. He said, “We receive youth who is completely raw and we train him to become a complete individual. Whenever you would such an individual walking in public, you can easily discern him to be either a retired soldier or a serving soldier. We need young men. The country needs young men to come forward. We are giving the Indian youth an opportunity to connect with us. It is a matter of national security. This has nothing to do with livelihood, or any such concept.”

As per this ‘Tour of Duty’ scheme, launched by the GOI, young men and women, aged between 17.5 and 21 years, will have to clear all levels of tests, after which they will be recruited as ‘Agniveers’ either directly through an educational institutions or recruitment drive. Such candidates, after being selected, will serve for a period of four years and they won’t be eligible for any pension in case they leave Armed forces after the four-year service period. While Indian men will be recruited in the Indian Army while women will be taken into the Indian Air Force and Indian Navy.