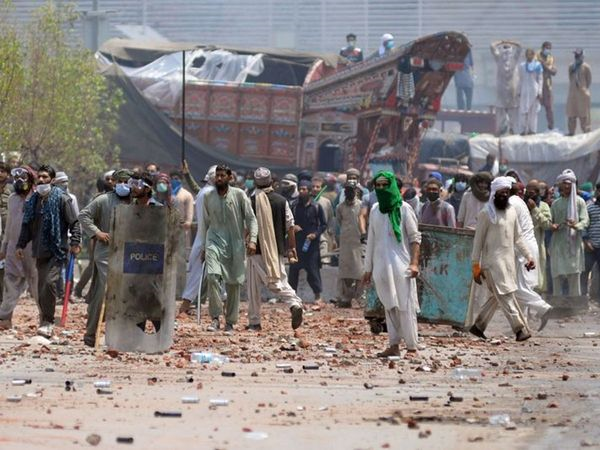 Banned extremist group Tehreek-e-Labbaik Pakistan (TLP) members clashed with police in Pakistan’s Lahore leaving a few supporters killed and more than 100 injured. Sources said, reportedly a few TLP members were killed at Markaz, however, only two has been confirmed so far.

TLP leaders has asked not to bury the members killed in the clash unless their demands are met. “TLP may begin its long march this evening which will further weaken law and order situation,” the source said.

During the clash, around eleven police officers were injured and a Deputy Superintendent of Police was held hostage.

The clashes started on Sunday morning when the banned group protesters gathered outside the party’s Saddar office and were chanting slogans against the arrest of their chief Saad Hussain Rizvi.

“Violent clashes took place place between TLP protesters and police and other security agencies at Chowk Yateem Khana in Lahore, the stronghold of TLP since 8:30 am,” said the source.

The police reached over the venue where they were attacked. The personnel of Pakistan Rangers, the paramilitary federal law enforcement organisation, and local police received injures.

After which reinforcement were called in. Then bullets were fired and stones were pelted. The local police said that Rizvi’s supporters attacked them with petrol bombs.

It is also alleged that TLP members encountered straight fire after which they went berserk.

“There are reports of deaths of TLP members at Markaz, only two has been confirmed so far,” said the source.

After that, reinforcement was called again and huge deployment of police personnel was carried out at the protest sites. The police fear that the protesters will again create ruckus later in the evening.

It was on last Monday, the TLP supporters carried protests by in major cities across the country and it continued for three long days, leaving hundreds of police officers were injured. The demonstration was carried out after the TLP chief Saad Hussain Rizvi was arrested as a “pre-emptive measure”.

During the crackdown, police arrested thousands of supporters charged them for for attacking police officers. Thereafter on Thursday, the government to banned the party and formally proscribed the Tehreek-e-Labbaik Pakistan.

The Interior Ministry notification stated that TLP “engaged in terrorism, acted in a manner prejudicial to the peace and security of the country.”

The religious group “intimidated the public, caused grievous bodily harm, hurt and death to the personnel of law enforcement agencies and innocent bystanders”, it added.

The group was proscribed under section 11B (1) of the Anti-Terrorism Act, 1997. It empowers the government to ban an organization involved in terrorism.

The ban will be placed under Section 11-B of the Ant-Terrorism Act, 1997, which gives the government powers to ban an organization involved or participating in terrorism.

It was done after Rizvi had threatened the government with protests if it did not expel France’s ambassador over depictions of Prophet Muhammad. Rizvi called on the government to honour what he said was a commitment it made in February to TLP to expel the French envoy before April 20 over the publication in France of depictions of the Prophet.

Rizvi is the son of late Khadim Hussain Rizvi, who protested last year against sacrilegious sketches in France and demanded expulsion of French ambassador. Later on, the protesters led by him dispersed peacefully after the government reportedly assured him to take action in the matter.

The TLP says that initially the government had assured to fulfill its promise of expelling the ambassador in February but later asked for time and finally agreed to fulfill its commitment by April 20.

After Rizvi pushed for it, the government arrested him leading to violent anti-France protests which paralysed large parts of the country.

The French embassy in Pakistan on Thursday had advised all French nationals and companies to temporarily leave Pakistan.

“Due to the serious threats to French interests in Pakistan, French nationals and French companies are advised to temporarily leave the country,” the embassy had said in an email to French citizens.

Anti-French sentiment has been simmering for months in Pakistan since the government of President Emmanuel Macron expressed support for a magazine’s right to republish cartoons depicting Prophet Mohammed — deemed blasphemous by many Muslims.