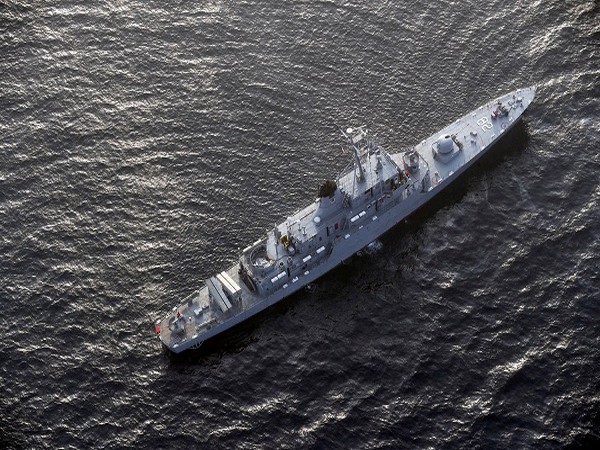 Hong Kong, April 25 (ANI): China continues to astound, and steal a march on its Western counterparts, with new types of weapons and missiles. The latest example of this occurred on 19 April when the People’s Liberation Army Navy (PLAN) released a video clip depicting a hitherto unknown missile being fired from a Type 055 guided-missile cruiser.

The new weapon is presumed by most commentators to be an anti-ship ballistic missile, which analysts refer to under the nomenclature of YJ-21. If the initial analysis of this YJ-21 is correct, then China becomes the first country in the world to operationally field such a missile from a naval vessel.

The YJ-21 was fired from the warship Wuxi, a Type 055 cruiser that had been commissioned in Qingdao just a month earlier, in March. Its launch from an active-duty ship indicates the missile is almost certainly now in PLA service.

From what can be seen in the video clip, the new Chinese weapon has small fins and a biconic nose. The missile’s small control surfaces suggest it is not a surface-to-air missile (SAM), a class that needs to be extremely maneuverable in order to hit fast-moving aircraft.

The YJ-21 was cold-launched from Wuxi’s stern vertical launch system (VLS), meaning it was expelled from the launcher cell by gas, before the missile’s own engine ignited once it was in the air and clear of the ship. Chinese VLS cells can accommodate missiles up to 9m long and with an 850mm diameter, so the YJ-21 must be within these parameters.

No performance specifications are yet known of the YJ-21, but its range could speculatively be anywhere from 1,000km to 1,500km. The South China Morning Post, which is not always accurate in its reporting on the PLA, credits the YJ-21 with a terminal velocity of Mach 10, or ten times the speed of sound.

Its heritage still murky, the YJ-21 may have been developed from the Chinese CM-401 missile, which is comparable to Russia’s Iskander short-range ballistic missile that has been used against Ukraine in recent weeks. When the CM-401 debuted in 2018, it was said that it was destined to be fitted on warships in the future. However, the YJ-21 adds a large booster compared to the CM-401.

The elongated and tapered maneuvering re-entry vehicle and short rocket booster have clearly been optimized to fit inside a confined VLS cell aboard a ship. The YJ-21’s sudden revelation does not come as a complete surprise, however. The US Department of Defense (DoD) suggested back in 2020 that China would arm its Type 055 cruisers with this type of weapon.

In fact, in the Pentagon’s most recent annual report on the state of the Chinese military, the DoD stated: “The Renhai [Type 055] has 112 VLS cells and can carry a large loadout of weapons including anti-ship cruise missiles, SAMs, torpedoes and anti-submarine weapons, along with likely land attack cruise missiles and anti-ship ballistic missiles when those become operational.”

The latter part of that quote is the relevant one, with China’s first ever anti-ship ballistic missile now indeed appearing operational.

The PLA already fields the DF-21D anti-ship ballistic missile, though it is launched from land-based vehicles. Obviously, the DF-21D’s range of approximately 1,200km is limited to waters less than this distance from the Chinese coast. The YJ-21 can be viewed as the naval equivalent of the DF-21D, giving Chinese naval warfare a major boost in capability since the missile can travel anywhere in the world’s oceans aboard ships.

This has obviously just occurred. This type of ballistic missile with large warhead would be able to target enemy capital ships such as American aircraft carriers, and help overwhelm defenses of surface combatants thanks to their great speed. A combination of supersonic cruise missiles and hypersonic ballistic missiles would be a formidable one for any targeted warship.

The South China Morning Post quoted naval expert Li Jie as saying, “The pairing of Type 055 large destroyer and the YJ-21 is meant to counter US maritime hegemony in the region through anti-access and area denial.”

The YJ-21 greatly extends the strike range of the Type 055, even though the YJ-21’s range does not have to be that great to present a serious threat. Although it can presumably receive targeting information from other assets, if the YJ-21 utilizes the ship’s own sensors – instead of relying on a complex and perhaps vulnerable chain of satellites and drones – the new missile could be extremely effective.

Armed with this new class of ballistic missile, Chinese Type 055s thus become arguably the most potent warships in the world thanks to their long-range firepower. It is as yet unclear whether the YJ-21 will arm other PLAN warships such as the modern Type 052D destroyer.

The Type 055 cruiser, which displaces some 12,600 tonnes, is a very important platform for the PLAN. It is able to roam the world’s oceans under its own merits, or to accompany Chinese aircraft carriers as part of their protective umbrella.

Illustrating the newness of the Type 055, the PLAN only commissioned its first of these guided-missile cruisers in 2020. In that same year, China launched the eighth hull of the class. Type 055 ships have been built by two different shipyards and, so far, six vessels have been commissioned into the North Sea Fleet in Qingdao and the South Sea Fleet in Sanya.

The East Sea Fleet has not been assigned any Type 055s yet, probably because it has not received any aircraft carrier so far.

Concerning Wuxi, the sixth-of-class Type 055 that fired the YJ-21 in the publicized video clip, Shanghai’s Jiangnan Shipyard took only 22 months to complete the ship after it was launched. Despite the impact of COVID-19, this was the fastest construction period to date for a Type 055. The seventh and eighth Type 055s (Zunyi and Xianyang) should enter service this year too.

Speaking of Shanghai, the launch of the Type 003 aircraft carrier there is rumored to have been delayed by COVID-19. This becomes understandable given that Shanghai has been enduring harsh and debilitating lockdowns that affect the workforce and logistics supply chain. Some expected the Type 003 to be launched on 23 April, a date marking the 73rd anniversary of the PLAN, but this did not happen. China’s third carrier, and its second constructed domestically, might be launched in June instead, some speculate.

On the same day as the YJ-21 was revealed, another new video emerged of a Chinese air- launched ballistic missile carried beneath an H-6N bomber aircraft. This missile, with a warhead similarly shaped to that of the DF-17 hypersonic glide vehicle (HGV) that had been unveiled in 2019, was first glimpsed in a Chinese online post on 17 October 2020.

The bomber seen in the latest clip belongs to the PLA Air Force (PLAAF), and a semi-recess in the H-6N’s belly allows carriage of the large new weapon. That first circulation of images is presumed to have been a captive carry test for the under-development missile. That ballistic missile is at least a couple of meters longer than the DF-21D, and with a smaller diameter too.

Again, the existence of this missile is not a surprise, for in its 2018 report, the Pentagon mentioned its existence and called it a CH-AS-X-13, though its Chinese nomenclature is as yet uncertain. This two-stage, solid-fueled weapon is believed to have been first tested in December 2016. Performance details are not known, but a rumored range of 3,000km has been mentioned.

It is uncertain what the operational status of this aircraft-borne ballistic missile is, but it is clearly progressing. The USA and others are extremely concerned by China’s progress in developing HGVs, after its first hypersonic test occurring in 2014. An HGV’s maneuverability and extremely high speed makes it almost impossible to intercept.

The location of the H-6N bomber seen in 2020 was reportedly Neixiang Air Base in Henan Province. This airfield is home to the 106th Air Brigade equipped with H-6 bombers that are purportedly nuclear-capable. This unit belongs to the Central Theater Command.

This airbase has undergone modernization and improvements. It already had 20 aircraft shelters sufficiently sized to house H-6 bombers, but of great curiosity was excavation of a large underground facility in an adjacent hill. Satellite imagery shows two taxiways leading to three entrances that could allow bombers to enter and exit the underground facility.

The H-6N strategic bomber is newer than the H-6K, which was modernized by fitting new avionics and larger Russian jet engines. The most important advancements in the H-6N are a probe above the nose that allows in-flight refueling, as well as the aforementioned belly recess instead of the traditional bomb bay. This allows large missiles to be carried on the centerline, and such an air-launched ballistic missile gives the PLAAF the ability to strike at land and naval targets at long ranges.

The H-6N was publicly unveiled at the October 2019 parade in Beijing, after likely entering PLAAF service late that year. The H-6 is an old design, though it will have to suffice until China completes development of its H-20 stealth bomber.