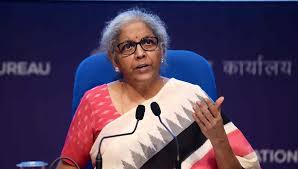 Business Desk-For the last one year, not only in India, but everything in the world remained corona-centric. Human life, thought and whole activity revolved around him. Once again the shadow of the changed form of Corona has started looming and it is believed that when the general budget is presented on February 1, probably Omicron will be at its peak.

There is also the apprehension that the budget, beyond the tradition so far, may not be presented in a packed Parliament. Keep it very limited. In such a situation, some questions have started dominating. Will there be a shadow of infection on the budget announcements too? Will the government seem complacent about big decisions and some tough decisions? Will there be a repeat of last year when the post-General Budget decisions became more important and the lips were dry due to lack of revenue?

The possibility is being expressed that with full vigilance, the government looks ready to run beyond all these apprehensions at the same old pace. Underlining the importance of health-related issues, big steps should be taken towards making self-reliant India a reality. In fact, before the election budget of 2023, this will be the last time when the government will take such decisions which will come to the ground by 2024 and prepare the complete blueprint of the future New India. An India that fulfills every need of a welfare state and the ground is ready to be on top of the global stage.

This is probably the first time that the health ministry’s thinking has become important in budget preparation. According to sources, on the basis of global experience so far, it is believed that the sooner Omicron spreads, the sooner its effect will be less. The entire system is already ready for the treatment of corona. In such a situation, along with vigilance, there is some certainty and this is the reason that the government can be seen ready to move forward with a straight foot. The land that had been prepared for major changes in the agriculture sector has been returned and there is no scope for it at the moment, but reforms have been the specialty of the Narendra Modi government and they will continue in other areas.

In the last seven years, the focus of the government has been on the social sector and efforts will be made to give shape to big schemes like Ayushman, Jal Jeevan Mission, Pradhan Mantri Awas, Ujjwala. Actually this political thinking has started changing again that development cannot win elections. For the first time in the last budget, India’s health budget had crossed two percent. Health along with education can make India stand high in the human index. This thinking of the government can also be seen in the upcoming budget and some decisions can also be taken. This year 75 years of independence are being completed, about which the country is excited. In such a situation, a big announcement will probably be made from the Red Fort, but its indication can be seen in the budget.

For example, a declaration that can put India at the forefront of the world. To be independent and guiding. It is not necessary that there should be a package for the industry, but decisions will be taken to make their path easier. It is believed that the focus of the government will be on infrastructure construction. Capital expenditure had increased by more than 30 percent in the last budget. According to the thinking, this time there will be more increase in this item, which will have an effect on investment, on employment and also on the revenue of the country.

Elections in five states including Uttar Pradesh are on the cusp. According to the estimates so far, the election process will be in full swing around the budget announcements. In such a situation, there will be every possibility that there will be a little populism. The Prime Minister himself has talked about the burden on the middle class and income tax payers many times. Will try to reduce this load a little again this time. However, along with this, preparations will also be made to increase the net (net) of income tax payers.

Obviously, the mechanism to make income from every source more transparent will be strengthened. The youth is standing with the Modi government for the last seven years. It is time that their aspirations seemed to be fulfilled. Infrastructure will play a big role in this. Perhaps education, health, housing, employment and infrastructure will be the keynote of the upcoming budget as it will also address the issues within the country and also make it capable of taking action at the global level.