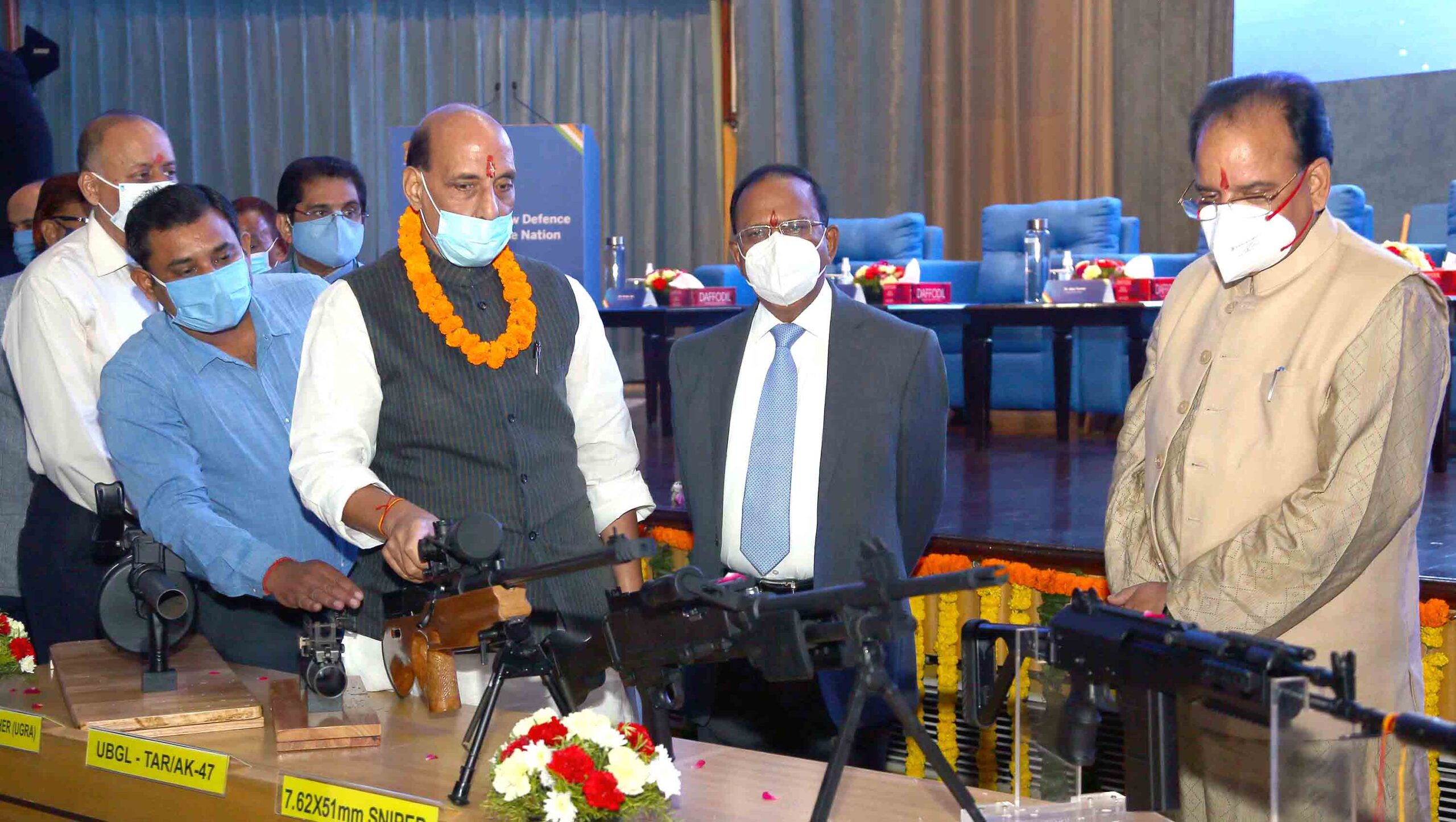 India’s defence export has increased by 325 per cent in last five years as private and public sectors working hand in hand in the mission of national security, said Prime Minister Narendra Modi on Friday.

Speaking at the event organized by the Defence Ministry to dedicate the seven new defence companies to the nation, Modi said that the decision of creating these companies was stuck for a long time, and expressed the belief these seven new companies would form a strong base for the military strength of the country in the times to come.

Seven new defence companies, carved out of Ordnance Factory Board (OFB), were dedicated to the Nation at a function organised by Ministry of Defence on the occasion of ‘Vijayadashami’ in New Delhi on October 15, 2021. Modi delivered a video address during the event and Defence Minister Rajnath Singh presided over the ceremony at Kothari Auditorium at DRDO Bhawan.

Noting the glorious past of Indian ordnance factories, the Prime Minister commented that upgradation of these companies was ignored in the post-independence period, leading to the country’s dependence on foreign suppliers for its needs.

“These seven defence companies will play a major role in changing this situation”, he said.

The government converted Ordnance Factory Board from a government department into seven 100 percent government owned corporate entities, as a measure to improve self-reliance in the defence preparedness of the country.

Modi also mentioned that these new companies would play an important role in import substitution, in line with the vision of Atma Nirbhar Bharat (Self Reliant India).

An order book of more than Rs 65,000 crore reflect the increasing confidence of the country in these companies, he added.

He recalled the various initiatives and reforms undertaken in the recent past that have created Trust, Transparency and Technology driven approach in the defence sector like never before. Today private and public sector are working hand in hand in the mission of national security, he said.

He cited Uttar Pradesh and Tamil Nadu Defence Corridors as examples of the new approach. He noted as new opportunities are emerging for the youth and MSME the country is seeing the result of policy changes in the recent years. “Our defence export has increased by 325 per cent in last five years”, he added.

He mentioned that it is our target that our companies not only establish expertise in their products but also become a global brand.

He urged that while competitive cost is our strength, quality and reliability should be our identity. He further mentioned that in the 21st century, growth and brand value of any nation or any company is determined by its R&D and innovation.

He urged the start-ups to become a part of this new journey through these companies to leverage the research and expertise of each other.

To enhance functional autonomy, efficiency and unleash new growth potential and innovation, the Government has decided to convert Ordnance Factory Board from a Government Department into seven 100 percent government owned corporate entities, as a measure to improve self-reliance in the defence preparedness of the country.

Describing the decision to convert OFB into seven defence companies as historic, Defence Minister, in his address, said the move reflects the government’s resolve of achieving ‘Aatmanirbhar Bharat’. He said, this decision will provide autonomy to these companies and improve accountability & efficiency in the functioning of 41 factories under them. He exuded confidence that the new structure will help in overcoming various shortcomings in the existing system of OFB and provide these companies incentive to become competitive and exploring new opportunities in the market including exports, while safeguarding the interests of the employees.

“The objective of this restructuring is to transform Ordnance Factories into productive, and profitable assets; improve expertise in product range; increase competitiveness; improve quality; enhance cost-efficiency and ensure self-reliance in defence preparedness,” he said.

Singh hoped that in the times of come, these new companies would not only play an important role in the defence manufacturing ecosystem but would also be engines of growth for the Indian economy. He added that restructuring is a continuing process, not an end in itself.

Saying that the new companies have full potential for growth, Singh said, if required, the government will provide support initially through financial and non-financial interventions.

Reiterating the Government’s commitment towards protecting the interests of OFB employees, Singh stated that all employees of OFB (Group A, B & C) belonging to production units will be transferred to corporate entities on deemed deputation for a period of two years without any change in their service conditions as Central Government employees.

Terming production of defence items as key for achieving ‘Aatmanirbhar Bharat’, the Defence Minister voiced the Government’s resolve of making India a defence manufacturing hub and net exporter through active participation of the private sector, joint ventures and setting up of defence manufacturing units. He said, since 2014, all efforts have been made to bridge the gap between age-old business methods and modern-day practices that are needed to make way into the global market, expressing satisfaction that the country is making giant strides towards achieving ‘Make in India, Make for the World’ vision of the Prime Minister.

“The country’s defence sector has scaled greater heights due to the reforms taken by the Government in the past few years. We have created a conducive ecosystem for exports and FDI with focus on manufacturing products indigenously,” said Singh.

He added that Ministry of Defence has set a target of achieving a turnover of Rs 1.75 lakh crore in aerospace and defence goods and services by 2024, including exports of Rs 35,000 crore.

Singh defined the present defence manufacturing scenario in the country as a synergy of the private and public sectors. “Public and private sectors are working hand-in-hand to enhance the preparedness of our Armed Forces,” he said.

He urged the new management to not just depend on orders for the Services, but explore new opportunities in India and abroad. He also wished the Nation on ‘Vijayadashami’ and remembered former President APJ Abdul Kalam on his birth anniversary