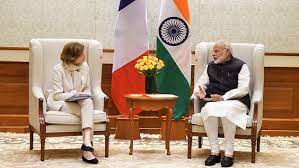 Florence Parly, the Defence Minister of France is all set to arrive in India tomorrow. She will also call on Indian Prime Minister Narendra Modi and the talks will cover various aspects including Indo-French Defence Cooperation.

The Defence Minister of France Florence Parly is all set to arrive in India tomorrow on an official visit. The aim of her visit is also to strengthen the Indo-French defence and strategic ties. She will also be calling on Indian Prime Minister Narendra Modi and Union Defence Minister Rajnath Singh in the National Capital.

The French Embassy, in their statement, said that Florence Parly will arrive in India tomorrow to strengthen the Indo-French defence ties and will call on PM Modi. She will also hold Annual Defence Dialogue with Rajnath Singh, the Raksha Mantri in New Delhi.

The French Embassy further added that “The talks will cover aspects of wide-ranging Indo-French defence cooperation, incl operational defence cooperation, particularly maritime security in Indo-Pacific; an industrial and technological partnership in line with Make in India and counter-terrorism cooperation.”

As per the top government sources, Parly will also meet the National Security Adviser, Ajit Doval, and will discuss the prevailing regional security challenges. She will also be visiting the National War Memorial in New Delhi to pay her tributes to the soldiers of the Indian Armed Forces along with General Bipin Rawat, the Chief of the Defence Staff who lost his life recently in a chopper incident in Tamil Nadu’s Coonoor. Further, the French Defence Minister will also participate in the discussion organized by the Ananta Aspen Centre entitled “How does France cooperate with India to defend a rules-based Indo-Pacific region?” The discussion will be moderated by the Chairman of Research and Information System for Developing Countries and former Ambassador of India to France, Dr. Mohan Kumar.

The crucial visit also highlights France’s engagement in the Indo-Pacific region and the importance of India in the French strategy.

France to work closely with India on Make in India initiatives in space, defence