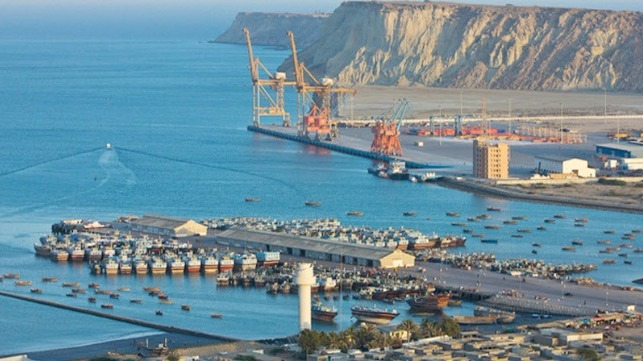 Pakistan’s Minister for Defence Production Zubaida Jalal, recently oversaw the signing of a A memorandum of understanding (MoU) for construction of a shipyard at Gwadar. This is a project that has been in the works for many years; at least since 2008.

The latest round of excitement started in 2017, when, in a seminar organised by the Pakistan Navy (PN), its Naval Chief announced the approval of a new shipyard at Gwadar, to be completed within three to five years.

Twelve years since the idea and three years since the latest round of excitement, Pakistan has only been able to sign a MoU that too between its Federal and Provincial Governments. Even this has been possible only because PN eyes it a form of enriching itself with new sources of income and post retirement jobs.

This is reflective of the larger malaise that afflicts Pakistan’s maritime economy riddled with inefficiencies; bureaucratic hurdles; corruption and the choke hold PN exercises over this sector.

Accordingly, while the outlook for the maritime economy remains gloomy, that of PN’s own milbus (military business) represented by the Bahria Foundation, remains bright.

Bahria Foundation, a charitable trust formed to look after the welfare of its personnel, both serving and retired, has expanded into a veritable conglomerate with business tentacles in areas ranging from construction, education, pharmacy, securities, travel, boat building and myriad maritime services like dredging, Liquefied Natural Gas terminal, shipyards, off-shore exploration, etc.

While there have always been accusations of money being diverted for some of PN’s operations and procurement, it is definitely a scheme for enriching its senior and middle level officers. Many are not aware that PN like its other sister services, runs formal ‘retirement’ plans for its senior officers who don’t make it to chief.

These plans are mutually discussed and agreed upon so as not to create any bad blood among those not making it to four-star rank.

The Bahria Foundation has four ‘pillars’ around which it organises its businesses. These include ‘Bahria Estates’, ‘Commercial businesses’, ‘Bahria Education and Training Services (BEATS)’ and the recently launched ‘Maritime Works Organisation’ (MWO) which forays into new areas like off-shore exploration and LNG terminals.

Formation of the MWO has coincided with Pakistan’s first off-shore exploration effort in collaboration with Exxon Mobil; and efforts at setting up additional LNG terminals to augment falling domestic gas production. While the Exxon Mobil effort failed, the tendering and bidding process for a third LNG terminal is at an advance stage. However, it has virtually been sabotaged by PN which wields the trump card of ‘national security’.

Despite appeals by bureaucrats and ministers, PN is yet to issue a No Objection Certificate for its construction at Port Qasim. However, its open knowledge that the objection is more for promoting its own terminal at Sonmiani Bay than fears of an Indian attack a la 1971. Accordingly, despite multi-national companies having sunk millions of dollars conducting feasibility studies and lobbying with even the Prime Minister, clearances are yet to be issued.

In the real estate sector too, Bahria Foundation has seen the launch of new ‘Naval Anchorage’ projects including at Islamabad and Gwadar even as the civilian sector has come to a grinding halt due to witch-hunts by central authorities in the name of corruption. It is well known that Pakistan Armed Forces, the biggest land owners in Pakistan, also referred disparagingly by some as the ‘kabza group’, are immune from such proceedings and make millions on dubious real estate deals.

Last year, Pakistan Air Force’s Shaheen Foundation had to pay back home-buyers after it tried to sell property built in the name of its martyrs in the open market. Currently, two off-shore islands off Karachi – Buddho and Bundal Islands, are in the news. These are being eyed by Pakistani real estate magnates offering a Dubai-like living experience even as the common Pakistan lives amidst squalor.

In Gwadar, Bahria Foundation has had a first mover advantage and having procured land at nominal rates is developing or selling them at huge premiums. This is adding to the concerns of the local Baloch who fear marginalization as more and more ‘outsiders’ move in. The Naval Anchorage project offers retired naval personnel a luxurious lifestyle, insulated from the grinding existence of locals, for whom, even basic amenities like water and electricity are a struggle.

PN’s ventures in the education sector too are flourishing with new Cadet Colleges (latest one being at Ormara) and Schools (PN Model Schools) being set up. The University it runs, Bahria University (BU), has also seen expansion with a new campus being set up at Lahore. Existing campuses at Karachi and Islamabad are also seeing addition of new departments like Dental, Engineering, and Science and Technology which were inaugurated just prior the previous PN Chief went on retirement. All this comes at a time when Pakistan’s education sector is seeing a serious resource crunch.

The total budget allocated for Pakistan’s education sector this year (2020-21) is only PKR 83.4 bn which is miniscule compared to PKR 1.7 trn for the Defence. Interestingly, even out of this meagre allocation, PKR 6.6 bn is for military run educational institutions. While PN’s Bahria Foundation flourishes, the overall maritime economy is in a state of mess. As already brought out, plans for a second shipyard and a third LNG terminal are languishing. A look at the Fisheries sector reveals the same story of apathy, mismanagement and corruption.

Fishing mafias abound many of whom are connected to nefarious groups, smugglers and armed gangs that dot Karachi. Over-crowding at Karachi fishing harbour has led to the spawning of illegal jetties at Ibrahim Hyderi which protrude like Helena’s locks into Korangi creek, even as fishing harbours at Gaddani, Ormara, Pasni, etc are silting up due to lack of funds for dredging.

The PMSA makes a killing here trying to act as arbiters to various warring fishing communities and groups leading to its own cycle of corruption. Despite potential, the Fisheries sector contributes a paltry 0.4 percent of the country’s GDP and catch sizes have seen no growth even as the numbers of fishing vessels continue to grow.

This gloom and doom is despite PN having accorded itself the role of arbiters of the maritime economy as part of its ‘significant role’ in nation building.

As per its own claims, PN aims “to act as a catalyst for synergising efforts and optimising resources of various stakeholders in the development of the country’s maritime sector which has lacked vitality despite its vast potential.”
For this it has a dedicated Directorate at Naval Headquarters to coordinate with agencies and the Naval Chief taking on the moniker of the Chief Adviser on Maritime Affairs.

Despite noble intentions, it is clear that PN is mostly interested in its own maritime milbus with hardly a thought for the civilian side of the maritime economy. As part of its firm grip, the Minister for Maritime Affairs makes frequent calls on the Naval Chief to coordinate policy issues and for allocation of lucrative appointments within the myriad departments of Karachi Shipyard and Engineering Works and Karachi Port Trust.

Another example of this neglect is the ship-breaking industry. From being the largest ship-breaking yard in the 1980s, it has fallen to third in ranking after India and Bangladesh and continues its decline. Despite contributing 10-15 percent towards the domestic Steel sector and employing a huge work force, the industry is languishing due to lax controls, uneven taxation, smuggling, poor safety standards, occupational health hazards and non-adherence to the latest international conventions and treaties.

Lastly, its Shipping sector too is stagnating with hardly any growth in the number of Pakistani flagged ships or private shipping companies. Even after 20 years of the launch of an ‘attractive’ Merchant Marine policy in 2001, the total fleet size of Pakistani flagged ships has been nominal. With only 16 percent of its total seaborne trade being carried by Pakistani bottoms, Pakistan continues to lose almost US$ 5bn per annum in foreign exchange in freight bills due to poor business environment and lack of planning.

Reflective of the larger problem, unless Pakistan’s maritime economy rids itself of its Navy’s choke hold and allows free enterprise, merit and transparency in the system, its prospects would continue to remain under the shadow of gloom even as, PN’s Bahria Foundation blooms.

(Binay Kumar Singh is an author and columnist. He can be reached at Twitter: @BinayBharat. The views expressed are personal)

The opinion piece was first published at Indo-Asian News Service, India’s leading news agency. It is a reproduction.