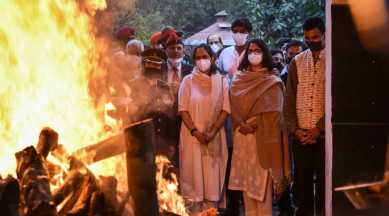 New Delhi-On one hand, Chief of Defence Staff General Bipin Rawat, who was killed along with his wife and 11 armed forces personnel in a helicopter crash near Coonoor, Tamil Nadu, on Wednesday, was cremated with full military honors in Delhi today. And on the other hand, the Indian Air Force today initiated a Court of Inquiry into the crash that saw a Mi-17VH helicopter going down in fire, killing 13 of its 14 passengers, including the decorated General Rawat.

The inquiry would be held into the reasons behind this accident. Defence officials have already retrieved the Flight Data Recorder of the chopper, also called the “Black Box”, which is expected to shed significant light on the events that led to this tragedy.

Meanwhile, the lone survivor of the crash, IAF Group Captain Varun Singh, has been shifted to Bengaluru from Wellington, where he was visited upon by Karnataka CM Basavaraj Bommai and Governor Thaawarchand Gehlot.