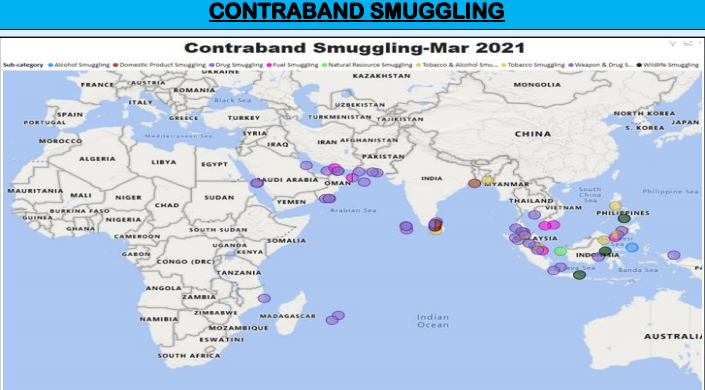 Significant increase in drug trafficking was witnessed in Indian Ocean Region in March this year, Indian Navy’s Information Fusion Centre (IFC) for the Indian Ocean Region (IFC-IOR) stated in its report on Wednesday. Reasons behind significant rise in March compared to February, the centre cited, was gradual easing of Covid-19 restrictions with consequent increase in maritime traffic density.

The Centre stated that a total of 275 incidents including contraband smuggling, human migration, illegal fishing and piracy and armed robbery were reported in the wider Indian Ocean Region in March 2021.

The centre, which strengthen maritime security in the region and beyond, by building a common coherent maritime situation picture and acting as a maritime information hub for the region, also stated in 2021, approximately 1,22,000 vessels were found to be operating in the region. At any given instant, an average of 19,000-20,000 distinct vessels operate.

The month of March witnessed an increase by 75 percent in contraband smuggling as compared to February 21. “The gradual easing of Covid-19 related restrictions with consequent increase in maritime traffic density, is likely to be one of the contributors of this trend,” the report stated.

A total 77 contraband smuggling incidents were recorded by the Centre for March 21. Majority of the incidents were related to drug smuggling followed by domestic product and tobacco smuggling. This is a significant (75 percent) increase from 44 incidents in February, 2021.

Major drugs seized included Methamphetamine, Cannabis, Heroin and Khat. The seizure of large quantities of methamphetamine during the recent months remains a concern for the region.

There was a 35 percent increase from February, 21 in seized quantity of meth including a single seizure of 55,836 kg by Omani authorities.

The Centre continued to monitor large seizures of turmeric as contraband (banned import commodity) off Sri Lanka.
Smuggling using small and fishing vessels and containers continues to account for majority of the incidents recorded.
Indian Coast Guard seized five AK 47 rifles with 1000 rounds of ammunition from a foreign fishing vessel, which was also carrying drugs, off Minicoy Island, Lakshwadweep, India.

This incident highlights the possible narco-terrorism nexus and the possibility of smuggling routes of seemingly benign items like domestic products, being exploited for more sinister purposes such as landing of arms and explosives.

The centre in its report stated that there was no change in piracy and armed robbery incidents as compared to February, 21, but a 32 percent drop was observed from March last year.

“Gulf of Guinea, which accounted for almost half of these incidents, saw a 10 percent reduction from February, 2021 and a steep with 46 percent drop from March last year. This decrease may in part be attributed to enforcement efforts by littoral nations and amongst others, enhanced presence of foreign warships, including those from the European Union,” the report prepared by the centre stated.

A total 22 seafarers have been kidnapped in two incidents, one of which occurred at more than 200 nm from the West African coast. Pirate action groups in the Gulf of Guinea retain their ability to target vessels at considerable distance from the coast.

A set of crew members kidnapped in February 21, were reportedly released, after 27 days in captivity. Two incidents of sea theft and one of attempted sea theft was reported in the Straits of Malacca and Singapore (SOMS).

One of the incidents occurred in the westbound lane, an area which was relatively inactive in the recent past. This showcases the dexterity of perpetrators, who retain their ability to target vessels in both the eastbound and westbound lanes of Singapore Strait TSS. One suspicious approach was reported in the Gulf of Aden. The possibility of misidentification of innocent fishing vessels and the challenge associated with large groups of fishing vessels, necessitate that any discharge of weapons, including warning shots by the embarked security elements is a deliberate and considered decision.

The reported incidents of illegal unreported and unregulated fishing saw a five percent decrease as compared to February, 21 and an increase of 30 percent from March last year.

Local illegal fishing accounted for about 65 percent of the reported incidents. The Centre observed about 75 percent increase in the number of poaching incidents as compared to March last year.

This may in part be attributed to the enhanced enforcement operations by coastal states and plausibly better data capture by the centre.

It is widely agreed that large scale poaching, especially by mechanised industrial-scale fishing vessels, was one of the drivers behind the spurt in Somalia based piracy and armed robbery in the past.

There was a four percent increase in the human migration incidents as compared to the previous month. About 68 percent of the reported incidents were recorded across the Mediterranean, 21 percent off Mayotte and remaining off Malaysia and Oman.

This is the highest monthly tally reported in 2021. Increased economic hardships possibly exacerbated by Covid-19 are likely to one of the drivers behind individuals attempting such illegal crossings.