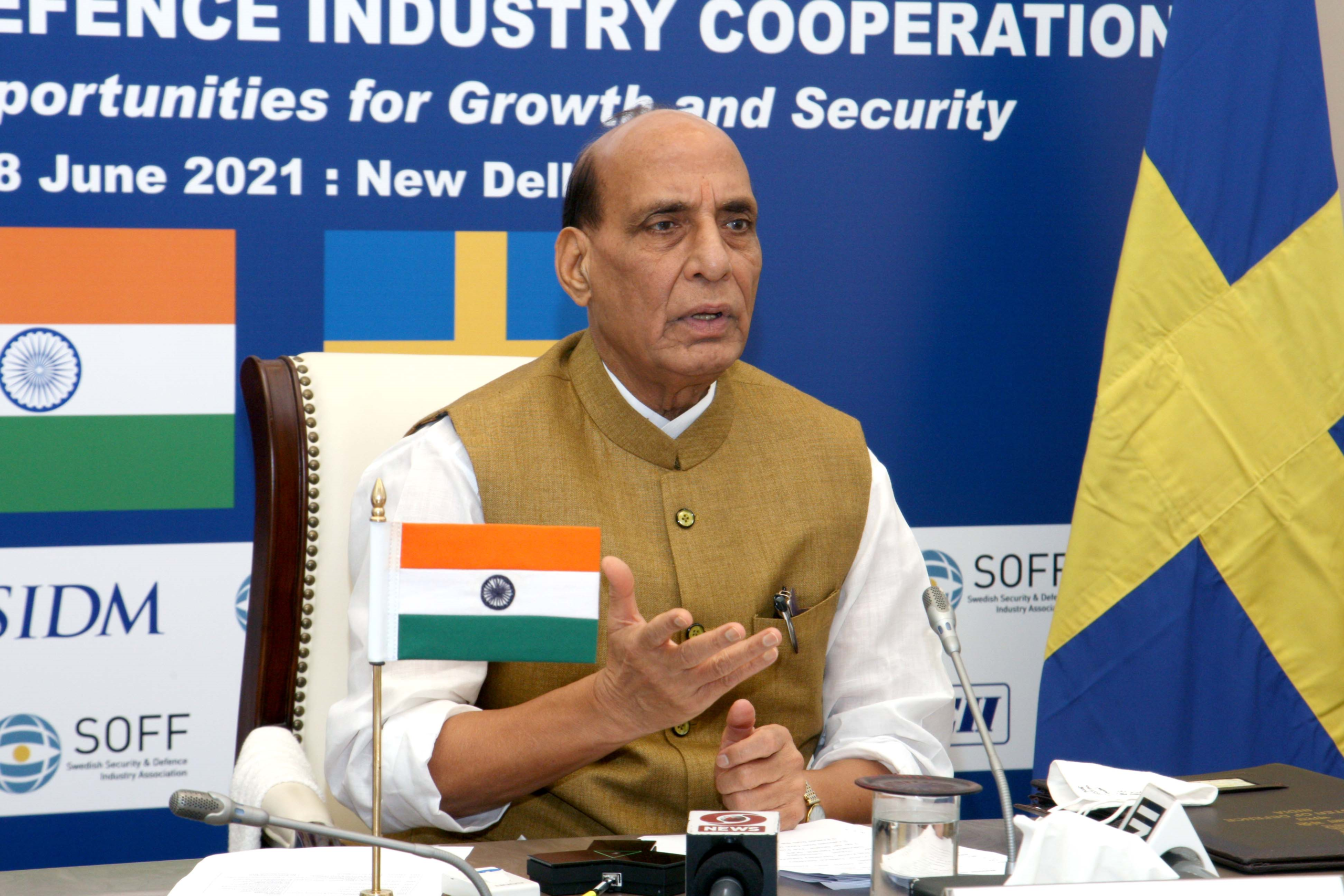 Stressing that there is a huge potential for more India-Sweden partnerships, he highlighted the strong capabilities of Indian defence industry in various fields and their willingness to collaborate with Swedish companies for co-development and co-production in areas of mutual interest.

“This growth is spectacular and can be attributed to increase in number of Swedish companies in India, as well as Indian companies in Sweden. India is also third largest trading partner for Sweden in Asia. This shows our robust business ties,” Singh said while addressing Webinar on India-Sweden defence industry cooperation.

The defence minister said that historically, two countries have had a great relationship which reflects not only common values but also commitment to global peace and security. “Our strong bilateral relationship is also based on strong business and R&D linkages,” he asserted.

“Our embassy in Sweden as well as Swedish embassy in India are both actively engaged in promoting these economic linkages through organisation of events in host countries,” he said.

Mechanisms like India-Sweden Business Round Table and Sweden India Business Council are contributing tremendously to this development. Besides, there exists a range of MoUs and agreements for bilateral cooperation in the fields of Science and Technology, Healthcare, Urban development, Renewable energy, Railways, Polar Science and Defence.

“…our bilateral business and Government to Government relations are on a strong institutional footing,” he said.
India-Sweden defence cooperation MoU, which was signed during the EU-India summit (under Presidency of Sweden) in November 2009 has scope for Exchange of expertise, training, logistic and maintenance, Military technical cooperation, Defence industrial and R&D cooperation and Exchange on UN Peace Keeping missions.

The Joint Working Group on Defence Cooperation, envisioned in the MoU has also met in Delhi in December 2018. India-Sweden has also signed General Security Agreement in 2019 on the exchange and mutual protection of classified information, enabling a comprehensive partnership in all defence sectors.

He mentioned that over the past few years Indian Defence Industry has been galvanized through progressive policy and procedural reforms which has catapulted the Industry to serve not only Indian requirements but also meet global demand.

“These initiatives pave way for more Swedish-Indian partnerships for ‘Make in India’ and `Make for the World’ under various categories of the Defence Acquisition Procedure 2020. Such a partnership model shall also lead to increased participation of Indian vendors in the global supply chain through impetus on indigenization,” the minister said.

The easing of FDI regulations and introduction of Buy (Global – Manufacture in India) in DAP 2020 are invitations for the Foreign Original Equipment Manufacturers (OEMs) to participate in the opportunities offered by the Indian Defence industry.

The Foreign OEMs can set up manufacturing facilities individually or partner with Indian companies through a joint ventures or technology agreement to capitalize on the ‘Make in India’ opportunity.

There is a lot of scope for Sweden and Indian defence Industries for co-production and Co development. Indian industry can also supply components to Swedish Industries.

“Swedish Firms such as SAAB already have a major presence in India and I am confident that other Swedish firms will find India as a major investment destination for Defence Manufacturing,” the minister said.

He also took an opportunity to invite Swedish firms to invest in the dedicated Defence Corridors of Uttar Pradesh and Tamil Nadu where they can benefit greatly from the unique incentives being offered by the State Governments and the availability of a highly-skilled workforce in India.