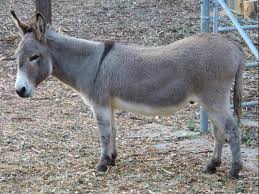 New Delhi-The clandestine Donkey Hide Trade (DHT) has reared its ugly head yet again after reports of 2019 Livestock census revealed there was a 61% decrease in the donkey population of India. From 0.32 million in 2012, the number of donkeys in India has gone down to 0.12 million, registering a specific decrease of about 61.23% in a 7-year period. This investigative study was conducted by the Brooke India chapter of UK-based international equine charity Brooke.

Sharat K Verma, who conducted the study on behalf of the charity’s India chapter, has said, “Overall decrease in donkey population in India has been recorded 61.23% between 2012 and 2019 livestock census. I came to know during the investigation that bunches of donkeys are butchered in some parts of Andhra Pradesh and Telangana alone”. These incidents, he claimed, indicate that the illegal DHT business is responsible for this drastic decrease.

The majority of this alarming shortfall seems to be concentrated in the interior regions of the states of Maharashtra, Andhra Pradesh, Rajasthan, Bihar, Uttar Pradesh and Gujarat. In just Maharashtra alone, there has been a 39.69% decrease in the population of donkeys between 2012 and 2019. Andhra Pradesh saw a 53.22% fall in donkey population during this period. The study saw Verma and his team talking to donkey owners, animal traders, cattle fair organisers and state officials as well as officials of the Central government’s Animal Husbandry department.

The DHT angle that Verma talks about feeds smuggled skin of donkeys to several countries, including China, which use it to make Ejiao, a traditional Chinese medicine. One such local donkey trader in Maharashtra apparently told Verma that he was approached by a “Chinese man” a few years ago, who wanted to buy from him 200 donkeys per month. Apart from the donkey skin, the illegal export of live donkeys is also done for their meat.

In fact, Verma claimed that China was directly or indirectly responsible for the sharp fall in the donkey population across the globe, especially since “Ejiao as a health fad is believed to prolong life and increase sex drive…”

The study report of Brooke-India has been submitted to the Animal Husbandry department of Government of India.