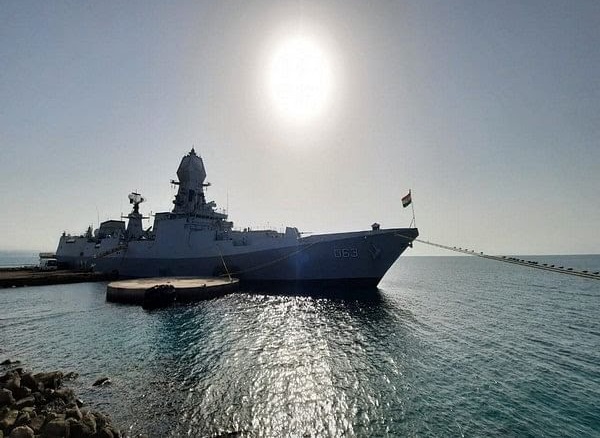 Three years ago in June, the Indian Navy commenced maritime security operations, namely, Operation Sankalp, in the Persian Gulf and the Gulf of Oman. In what has now become a hugely successful and ongoing operation, the Navy has reportedly deployed thirty-two warships on patrol till date, ensuring, on an average, the safe passage of sixteen Indian merchant ships every day.

Operation Sankalp began in June 2019 in the wake of the tenuous maritime security situation caused by the escalation in tensions between Iran and the United States in the Persian Gulf. In that month, two merchant ships which were transiting through the Gulf of Oman, came under attack in quick succession thus exposing the vulnerability of shipping to such threats. The Persian Gulf is a strategically important waterway in the world which produces a third of world’s oil and contains over half of the world’s crude oil reserves. It is connected with the Gulf of Oman and the Arabian Sea through the narrow Strait of Hormuz. It must be noted that the Persian Gulf region is also the major source of oil imports for India with the share of Persian Gulf countries in India’s crude imports remaining at around sixty per cent in the last fifteen years. Therefore, any disruption in oil traffic from the Persian Gulf could potentially lead to an energy crisis in the country. It is in this perspective that Operation Sankalp assumes national significance.

Operation Sankalp is a manifestation of the Indian Navy’s military objective of safeguarding India’s mercantile marine and maritime trade.

Protection of trade, however, is an objective that spans the entire spectrum of conflict – from peace to war. Navies accomplish this objective through various means which include convoys, elimination of potential threats, or, simply by their presence to deter attacks on merchant ships. In conditions that exist currently in the Persian Gulf, Indian Naval ships demonstrate their presence, to deter threats as well as to assure Indian merchant ships of effective and timely response.

The Navy has also deployed its ships in the Gulf of Aden and off the coast of Somalia since 2008 for anti-piracy missions. In this period, it has safely escorted Indian as well as foreign merchant ships and has also disrupted several piratical attacks on merchantmen.

In addition, the Indian Navy routinely deploys ships in other important parts of the Indian Ocean – the Malacca Strait, Bay of Bengal, Andaman Sea and the southern Indian Ocean – under the umbrella concept of ‘Mission-Based Deployments’, which the Navy unveiled in late 2017.

This concept enables the Navy to be prepared to respond to contingencies that may arise in far-flung areas.

In addition to ensuring the security of trade, the Indian Navy has also capitalised on operational deployment in the Gulf (as also in other places) to enhance cooperation and interoperability with like-minded friendly navies in the region. This is achieved through opportune exercises at sea with friendly navies, and, port calls.

For instance, Indian Navy’s Destroyer Kolkata visited Djibouti in May this year for an operational turn round (OTR) during which the ship engaged with various local and international maritime security agencies to enhance cooperation in maritime security, including training and other mutually beneficial subjects. Similarly, INS Betwa in end December last year, had carried out a Maritime Partnership Exercise with USS Tempest and USS Typhoon in the Gulf of Oman.

As is evident, apart from the obvious advantage of protecting the country’s critical energy lines, this deployment, these deployments also contributes to regional security as well as offers opportunities for international cooperation.

Sankalp is a Sanskrit word which means “Commitment” and is in standing with the Indian Navy’s aim to protect India’s shipping and trade, which is clearly reflected as one of the National Maritime Interests espoused in the Indian Navy’s unclassified Strategy Document, “Ensuring Secure Seas: Indian Maritime Security Strategy”.

As the operation continues into the fourth year, it surely signals India’s resolve and commitment to maritime security in the region.