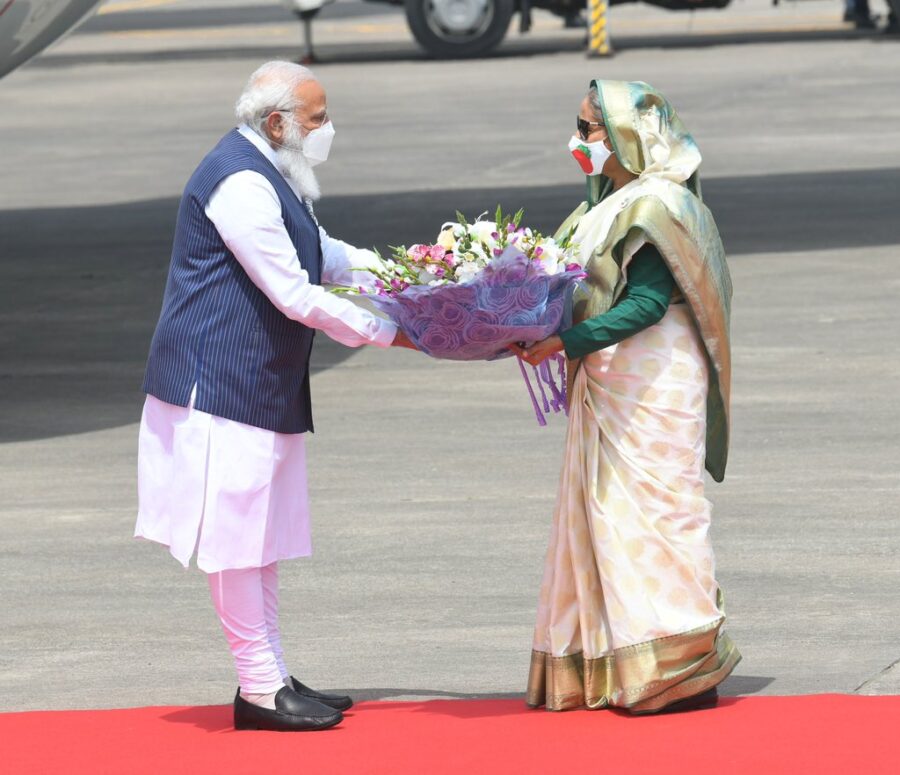 Indian Prime Minister Narendra Modi arrived at Bangladesh on Friday morning at 11 am at Dhaka Airport to strengthen bilateral relationship. It is the first foreign trip since Covid-19 outbreak. He is on a two-day visit to Bangladesh.

The visit is in connection with the commemoration of three epochal events including Mujib Borsho, the birth centenary of Sheikh Mujibur Rahman. The other event are 50 years of the establishment of diplomatic ties between India and Bangladesh and 50 years of Bangladesh’s war of liberation. Indian Prime Minister will attend the National Day programme of Bangladesh as the guest of honour.

Landed in Dhaka. I thank PM Sheikh Hasina for the special welcome at the airport. This visit will contribute to even stronger bilateral relations between our nations. pic.twitter.com/oWFydFH2BG

On the 50th Independence Day of Bangladesh, PM @narendramodi paid tributes at the National Martyr’s Memorial in Savar.

The courage of those who took part in the Liberation War of Bangladesh motivates many. pic.twitter.com/q7bZwATNHt

The visit highlights the priority India attaches to Bangladesh. The Prime Minister had last visited Bangladesh in 2015.

Prior to his departure, Modi said that he looks forward to having “substantive discussions” with Hasina.

He will also call on Bangladesh President Md. Abdul Hamid. “I look forward to my participation at the National Day celebrations tomorrow, which will also commemorate the birth centenary of the Father of the Nation of Bangladesh, Bangabandhu Sheikh Mujibur Rahman. Bangabandhu was one of the tallest leaders of the last century, whose life and ideals continue to inspire millions,” he said in a tweet.

The Prime Minister is also looking forward to visiting Bangabandhu’s Samadhi in Tungipara to pay his respects.

“I am particularly looking forward to my interaction with representatives of the Matua community at Orakandi, from where Sri Sri Harichandra Thakur ji disseminated his pious message. I will be having substantive discussions with Prime Minister Sheikh Hasina, following our very productive virtual meeting in December last year. I also look forward to my meeting with His Excellency President Abdul Hamid, and to interactions with other Bangladeshi dignitaries,” he said.

He added, “My visit will not only be an occasion to convey appreciation for Bangladesh’s remarkable economic and developmental strides under Prime Minister Sheikh Hasina’s visionary leadership, but also to commit India’s abiding support for these achievements. I will also express India’s support and solidarity for Bangladesh’s fight against COVID-19.”

During his visit, the Prime Minister will also interact with diverse groups of Bangladesh’s polity and society.