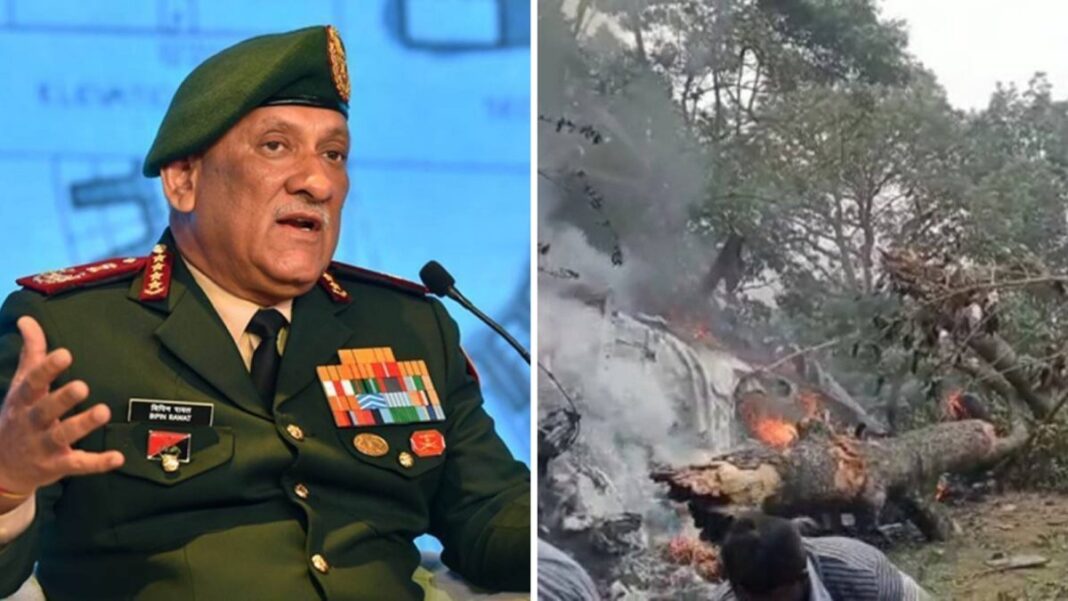 New Delhi-In a tragic turn of events today, a military chopper carrying General Bipin Rawat, India’s first Chief of Defence Staff and 13 others crashed near Coonoor in Tamil Nadu. General Rawat, his wife, Madhulika Rawat, and 11 others, including his Defence Assistant, security commandoes and Air Force personnel were confirmed dead by official sources.

The sole survivor, at the time of filing this report, is Group Captain Varun Singh, who was flying the helicopter. He is currently admitted to Military Hospital in Wellington Cantonment. In an official tweet, the IAF said, “Around noon today, an IAF Mi 17 V5 helicopter with a crew of 4 members carrying the CDS and 9 other passengers met with a tragic accident near Coonoor, TN. With deep regret, it has now been ascertained that Gen Bipin Rawat, Mrs Madhulika Rawat and 11 other persons on board have died in the unfortunate accident.”

Gen Rawat was on a visit to Defence Services Staff College, Wellington (Nilgiri Hills) to address the faculty and student officers of the Staff Course today.

As the news came out, there has been an outpouring of grief on behalf of personalities from different walks of life, as well as common citizens. Leading those condoling the tragic death of Gen Rawat and 12 others, Defence Minister Shri Rajnath Singh said in an official tweet, “Deeply anguished by the sudden demise of Chief of Defence Staff Gen Bipin Rawat, his wife and 11 other Armed Forces personnel in an extremely unfortunate helicopter accident today in Tamil Nadu. His untimely death is an irreparable loss to our Armed Forces and the country.”

Congress leader Rahul Gandhi also tweeted, “I extend my condolences to the family of Gen Bipin Rawat and his wife. This is an unprecedented tragedy and our thoughts are with their family in this difficult time. Heartfelt condolences also to all others who lost their lives. India stands united in this grief.”

Gen Rawat, 63, was appointed the country’s first CDS in January 2019. The position was created with the aim of integrating the three services – the Army, the Navy and the Air Force. In addition, the former Army Chief was also the head of another newly-created entity, Department of Military Affairs. His sudden demise is a tragic blow to the country.

Centre amends rules to enlarge pool for appointing CDS; both serving, retired officers to be considered