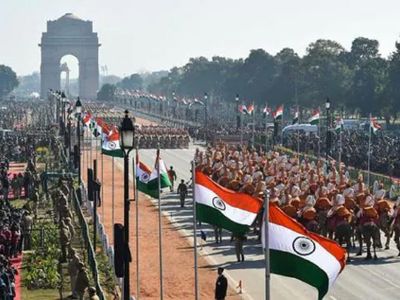 News Desk-Taking a big decision on Saturday, the central government has decided to start the Republic Day celebrations from January 23 instead of January 24. This decision was taken at the Republic Day Celebration on the birthday of Netaji Subhash Chandra Bose .This decision has been taken due to the inclusion ofSubhas Chandra Bose was born on 23 January 1897. The central government has announced many important days in its tenure so far. Let us tell which days have been announced by the Modi government after coming to power.

This time only 24,000 people are allowed

Defense establishment sources said that due to Corona, 24,000 people will be allowed to see it this time compared to 25,000 people who attended the parade last year. This includes spectators, dignitaries, government officials, children, NCC cadets, ambassadors, senior bureaucrats and politicians. Out of these 24 thousand seats, 5,200 seats are for general audience, who can buy tickets. According to media reports, like last time, this time also the national function can be organized without the presence of any foreign chief guest.

Double dose of vaccine mandatory for all participants

Significantly, like last year, spectators will be seated at a distance of 6 feet to ensure distancing rules, and masks will be mandatory. During this, the entire area will be sanitized, and sanitizer dispensers are also likely to be installed near the seating area. In such a situation, double dose of vaccine has been made mandatory for all cultural participants and armed forces personnel. Along with this, all of them will also be tested for Covid-19.

At the same time, as per tradition, only VVIPs will be sitting on the podium, which will include President Ram Nath Kovind, Vice President M Venkaiah Naidu, Prime Minister Narendra Modi, Defense Minister Rajnath Singh and Minister of State for Defense Ajay Bhatt. In such a situation, it is expected that the Ministry of Defense will announce the details of the participating tableau and marching contingents on Monday.

Haryana will aim for no. 1 position in KIYG 2021: CM Manohar Lal Khattar

Haryana will aim for no. 1 position in KIYG 2021: CM Manohar Lal Khattar