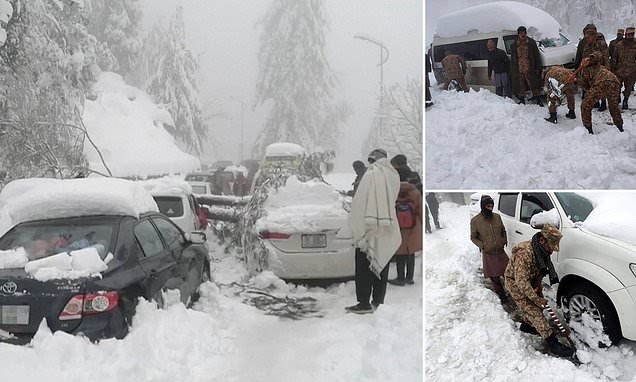 In Pakistan, New Year’s first spell of heavy rainfall and snow brought with it tragedy of 40 deaths, hundreds displaced and houses, livelihoods snatched forever. In Murree, north Pakistan’s popular hill station, known for its natural beauty and holiday resorts, 23 people, which included 9 children, were frozen to death as their thousands of vehicles were left stranded in heavy snow.

Nouman-ul-Haq, who is an official with Pakistan’s National Disaster Management Authority, told the media on Sunday that the mishap in Murree left 23 people frozen to death inside their vehicles as they were on their way to a winter holiday in the resort town. Besides being a human tragedy of huge proportions, this is also a big management crisis for the authorities in the area.

The local administration has banned entry of tourists to the hill station for the next two days, at least. However, it might be a case of too little, too late!

Nevertheless, authorities have launched a full-fledged operation to rescue the stranded tourists even as thousands of cars remain stuck in snow along the roads in that area. Locals have also pitched in with help by offering blankets and food to those stuck in the chilly weather.

Meanwhile, in other parts of the country including Punjab, Balochistan and Khyber Pakhtunkhwa provinces, at least 20 more were killed in situations arising out of extreme weather conditions over the weekend.

The local authorities are also assisted by personnel of Pakistan’s Army, Navy and paramilitary Frontier Corps in the relief and rescue operations.

Flash floods have been predicted in various parts of the country as the weather department also warned of heavy rainfall with snow causing road closures. Flights were cancelled or diverted due to bad weather and power outages were also reported in different parts of Pakistan.