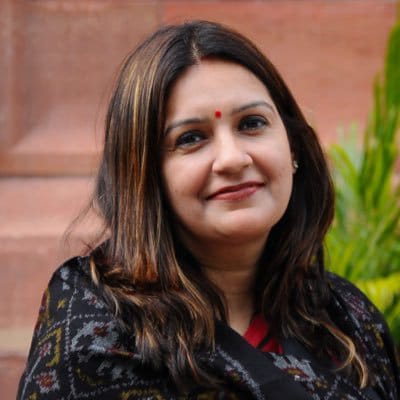 The Shiva Sena will back any opposition coalition whose mail goal is to dislodge the BJP from power, Priyanka Chaturvedi, party MP and deputy leader in the Rajya Sabha, told Rajesh Kumar Thakur in an interview. Excerpts:

How’s the josh of the opposition to challenge the BJP in the 2024 Lok Sabha elections?

Josh is high! All opposition parties have a common objective — to defeat the anti-constitutional and anti-democracy political ideology of the BJP. The BJP government has now become a braggadocio and is misleading the people by their misplaced trust in the party. So, all opposition parties should understand the people’s plight and pain and have a collective responsibility to end the BJP-brought kakistocracy in the country. In a simple political terminology, the unity in opposition is the need of hour.

The Shiv Sena in Maharashtra is leading the government with the support of the Congress. But TMC supremo Mamata Banerjee is working on a national plan with other like-minded regional parties to form a new anti-BJP, non-Congress third front. Will the Shiv Sena be a part of such a group if it is formed?

The Congress is the oldest national party. To say that it did not win a good number of seats in the last Lok Sabha elections and so doesn’t deserve to be in the driving seat in an opposition alliance is not right. It will also not be good for the unity of the opposition at the national level. As far as the Shiv Sena is considered, its aim is to support any combination that would be able to defeat the BJP. It is necessary to have the Congress for the unity of opposition. Without Congress, it is not only difficult but totally unthinkable to have unity in the opposition. Each and every party in opposition should understand this. The Shiv Sena will go with any combination whose first objective will be to remove BJP from power.

It is said the opposition lacks a strong leadership to challenge Narendra Modi.

There is no dearth of leaders in the opposition. There is no leadership crisis. Whenever the ruling party becomes arbitrary, a new leader emerges. There is SITA (Someone Is There Always) factor in opposition; not the TINA (There Is No Alternative) factor. A competent and right leadership will emerge at the right time to lead the nation in a far better way. For now, all the opposition parties need to unit themselves to oust the BJP from power.

Infighting in the Congress is said to be one of the reasons for the party not being so active in taking a lead to bring about opposition unity. As an ally, do you agree with this?

Yes, the Congress is facing infighting. But it is equally true that the most of the Congress leaders still consider the Gandhi family as their leader. We as an ally should support and respect such sentiments. But yes, the Shiv Sena believes either Rahul Gandhi or Sonia Gandhi ji should now become fully active to bring about the opposition in unity.

Is there any chance of reunion for Sena-BJP reunion?

The possibility does not arise as the BJP stabbed the Shiv Sena in the back for narrow political gains.

Admissions Open for Courses at Shiv Nadar University, Delhi-NCR, for 2022-23

Rahul Gandhi Steps Up Attack On BJP, Says Don’t Care What Anybody Says About Jawaharlal Nehru

Admissions Open for Courses at Shiv Nadar University, Delhi-NCR, for 2022-23

Rahul Gandhi Steps Up Attack On BJP, Says Don’t Care What Anybody Says About Jawaharlal Nehru