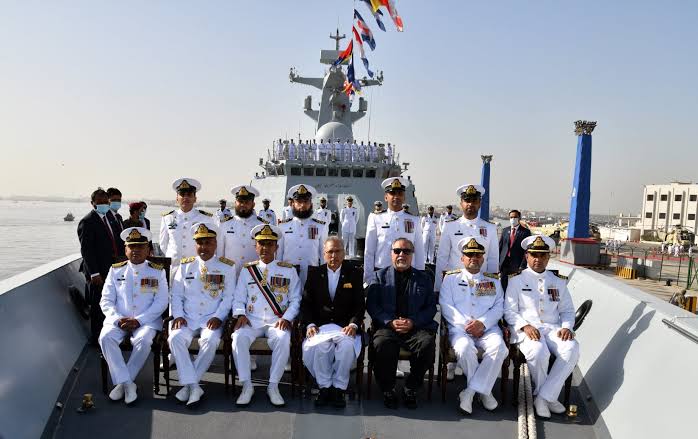 From the 1960s, for nearly 50 years, the Pakistan Navy was able to establish itself as a respectable maritime force in the North Arabian Sea. Given the proximity of Pakistan’s coast to the troubled, oil and gas rich waters of the Persian Gulf, working with Pakistan’s Navy became an easy choice for the major maritime powers of the world. Pakistan’s Navy was almost entirely western in origin, with frigates from Britain and America, submarines from France and aircrafts from European and American manufacturers. This allowed a very high degree of standardisation in operating procedures for Pakistan naval assets when working alongside western navies.

Consequently, even when Combined Maritime Forces or CMFs were established in the region, to counter challenges faced by the global community – such as drug-trafficking, piracy and maritime terrorism – the Pakistan Navy was an automatic choice for inclusion. Over the last decade and a half, however, whilst it remains largely unspoken, there is a significant loss of confidence in Pakistan’s Navy as a credible maritime partner in the Arabian Sea.

The issue gets further complicated as the Pakistan Navy itself battles an inability to sustain operations at a high tempo, simply because their Chinese-origin inventory keeps breaking down. The crowning example of this are the four F -22 P frigates which were touted to be the ‘new workhorses’ but have spent significant periods either tied up at a port or sailing blind with multiple sensors duff. Ongoing deliberations on engines for the eight new Chinese origin submarines being acquired by Pakistan reveal Islamabad’s unease with Chinese technology. Originally, these were supposed to be fitted with German engines, but policy changes in Berlin have rendered this impossible. Beijing and Islamabad had extensive discussions on using Chinese engines, which the latter may need to finally accept, given their lack of negotiating power!

Consequently, going forward, the Pakistan Navy simply will not be able to shoulder the kind of tasking it had in the past – neither financially not in terms of force availability. Pakistan’s historical security partners have also taken note of this trends and recalibrated their engagement accordingly. This was proved during the last edition of Pakistan’s main international exercise ‘Aman’ – where only seven nations participated with assets! Interestingly, every official news report of this exercise claimed 45 nations had participated and that the exercise was amongst the largest in the region!

Another cause for the growing trust gap is the Pakistan Navy’s seeming inability to effectively address the huge volume of drugs being exported by terrorist and criminal entities from the Makaran coast. In recent months, boats laden with huge amounts of drugs and narcotics have been seized by maritime forces across the Western Indian Ocean – from East Africa to Sri Lanka and Maldives. All of these shipments were reported to have set sail from Pakistan! As a result, other nations with a stake in regional security are seeking new ways of working to overcome this failure of the Pakistan Navy.

Lastly, there is a growing concern about the changing priorities within the personnel of the Pakistan Navy. There is a marked increase in the number of personnel who may have subscribed to a more radical school of thought – resulting in a near omnipresent risk of another ‘Zulfiqar’ type incident. There is no doubt that every international maritime entity is now wary of the ‘radicalisation’ of Pakistan’s Navy.

It is therefore unsurprising that the Pakistan Navy, which is celebrating a ‘Navy Day’ in September, finds itself bereft of any good choices. As it steadily loses international support, and becomes a subsidiary of the Chinese Navy, it continues to lose the trust of its traditional partners and friends. This does not mean that the Pakistan Navy will not grow, or persevere… it will. But, unless significant changes are implemented, it will gradually become a beacon of instability, uncertainty and regional insecurity – a far cry from its respectable history.