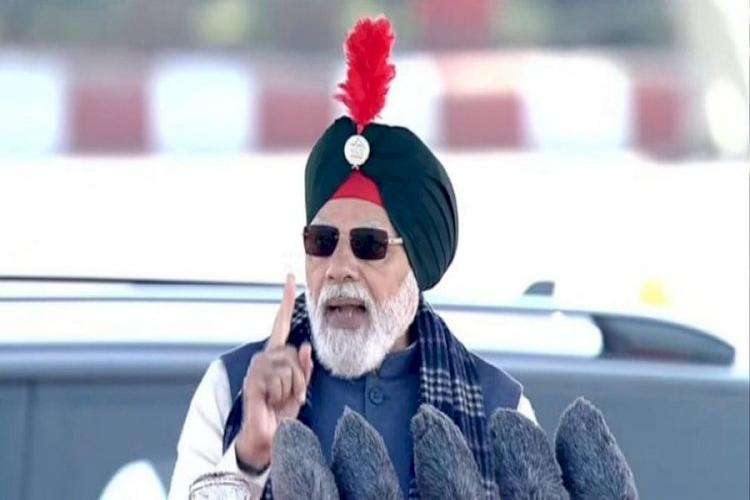 Prime Minister Narendra Modi while addressing the National Cadet Corps ( NCC ) rally at Cariappa Ground in Delhi on Friday said that at this time the country is celebrating its Independence Day ( Azadi Ka Amrit Mahotsav ). And when a young country witnesses such a historic occasion, there is a different enthusiasm in its celebration. I am seeing the same enthusiasm right now at Cariappa Ground. I am proud that I have once been an active cadet of NCC like you. The training I got in NCC, what I got to learn, today I get immense strength in discharging my responsibilities towards the country.

The Prime Minister further said, today all the young men and women who are in NCC, are in NSS, most of them were born in this century itself. You have to take India till 2047. That’s why your efforts, your resolve, the fulfillment of those resolutions, will be the accomplishment of India, India will be successful. No power of the world can stop the country whose youth starts moving ahead with the thinking of nation first. Today in the field of play, India’s success is also a great example of this.

PM spoke on Vocal for Local

PM Modi said, in the nectar of independence, from today to next 25 years, you have to combine your tendencies, your actions with the development of the country, with the expectations of the country. All the youth can play a big role in the campaign of Vocal for Local. If the youth of India decide that whatever Indian labor has been involved in manufacturing, sweat of an Indian, and use only that thing, then the fate of India can change. Today, on the one hand, there are good possibilities related to digital technology and information, on the other hand there are dangers of misinformation.

It is necessary to end the rumors.

He said that the common man of our country should not fall prey to any rumour, it is also necessary. NCC cadets can run an awareness campaign for this. How can drugs reach the school-college where there is NCC, there is NSS. As a cadet, you yourself should be free from drugs and at the same time keep your campus free from drugs. Your friends, who are not in NCC-NSS, also help them to quit this bad habit.

NSS laptop repair service expands its wings across the India

NCC cadets create awareness against use of tobacco

HarperCollins is proud to announce Chronicles of the Lost Daughters by Debarati Mukhopadhyay translated by Arunava Sinha, releasing in June 2022

NSS laptop repair service expands its wings across the India

NCC cadets create awareness against use of tobacco

HarperCollins is proud to announce Chronicles of the Lost Daughters by Debarati Mukhopadhyay translated by Arunava Sinha, releasing in June 2022