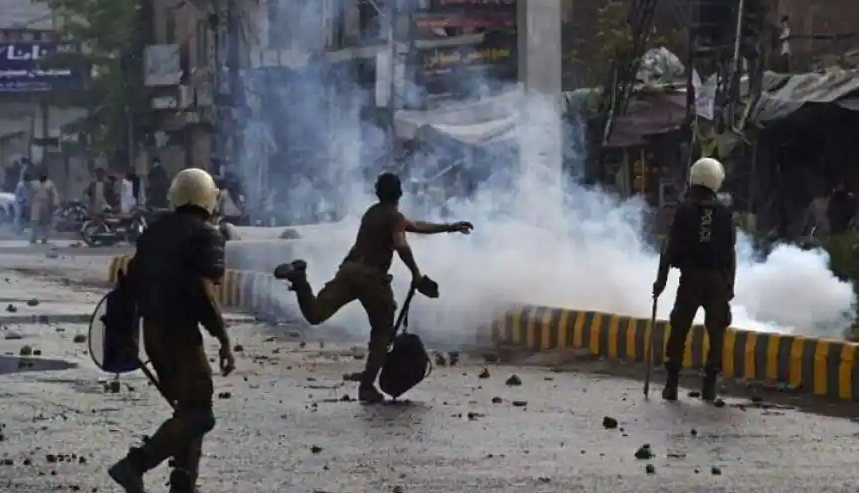 Unrest in Pakistan continues on Monday as radical banned Tehreek-e-Labbaik Pakistan (TLP) group holds the entire country to ransom. The group draws its ideology from the Barelvi Sect of Sunni Islam, a far-right Islamist group in Pakistan, founded by Khadim Hussain Rizvi on August 1, 2015.

TLP is known for its countrywide street power and massive protests in opposition to any perceived change to Pakistan’s blasphemy law or disrespect to Prophet Muhammad.

It’s first demonstration of street power came to light following the execution of Mumtaz Qadri the bodyguard of Salman Taser, the Governor of Punjab, who killed the Governor for publicly voicing his support for Asia Bibi — Aasiya Noreen.

Qadri was hung on February 29, 2016, after which TLP supporters took to the streets across Pakistan, proclaimed him a martyr, chanted anti-government slogans and clashed with the police. A TLP patron, Pir Abdul Qadri, also called for the killing of the Supreme Court justices who ruled on the case and the Army Chief.

“TLP, among other extremist religious outfits, was maneuvered into mainstream politics by the country’s Army brass as one of its tools of political engineering,” top sources in the government said.

It was thought that carving out the far-right fringe from the conservative voter base of the Pakistani Muslim League (PML-N), would damage it in the 2018 general elections, which proved correct and many PML-N candidates lost to

Pakistan Tehreek-e-Insaf (PTI), as the voter base of PML-N gravitated towards PTI.

Top sources said that Pakistan Army’s support for TLP was evident during their protest which took place from November 8, 2017, at Faizabad contesting changes in the elections bill 2017, demanding resignation of Minister for Law and Justice Zahid Hamid.

The Inter-Services Intelligence (ISI) then ‘brokered’ a deal between the TLP and the government.

Wrapping up the suo-moto case of Faizabad protests, the two bench judge which included Justice Qazi Faez, directed DG Inter-Services Public Relations, the media and public relations wing of the Pakistan Armed Forces, and ISI amongst others to operate within their mandate.

The said Judge is now facing various charges of corruption on the behest of Pakistan Army and the ISI, government top sources said.

In October 2020, Samuel Paty, a teacher, was beheaded in Paris by an Islamist terrorist for displaying a cartoon of Muhammad. French

President Emmanuel Macron defended freedom of expression and the rights to publish such cartoons, after which widespread protests took place in Pakistan, with calls to boycott French products and sever diplomatic ties with France.

In November 2020, activists of TLP demanded the expulsion of French Ambassador from Pakistan. The protests were called off on November 16, 2020 after the Pakistan government reached an agreement with TLP by seeking more time to discuss the matter in Parliament.

On April 11, 2021, TLP leader Saad Hussain Rizvi, son of founder Khadim Rizvi, released a video message asking TLP activists to launch protests across Pakistan if the government did not expel the French Ambassador from the country by April 20, 2021.

Thereafter, the Pakistan government Saad Rizvi in Lahore on April 12, 2021. Following which protests broke out across the country, with TLP activists blocking roads and cutting off Lahore, Islamabad, Peshawar and Gujranwala from each other.

The protests turned violent with reports of stone pelting; at least two people were killed in the riots on April 12, 2021. In addition, TLP claimed that two protesters were shot dead in Faisalabad and Karachi.

On April 13, 2021, a police officer was beaten to death by the rioting mob in Lahore, while 40 others were injured.
TLP spokesperson Tayyab Rizvi claimed that the number of TLP workers “martyred” in the protests by the second day had increased to 12.

Punjab Police spokesperson confirmed that two policemen were killed by the protesters who used clubs, bricks and firearms to attack them.

Pakistan rangers, the paramilitary force, were brought in to assist the local police across various cities including Lahore, Gujranwala, Rawalpindi and Bahawalpur.

Amid this, the French embassy on April 15, 2021 in Pakistan advised French citizens and companies to temporarily leave Pakistan “due to serious threats”.

Situation turned extremely violent on April 18, 2021, at Yateem Khana Chowk, Lahore where three people were killed and hundreds of others, including 15 policemen injured in a clash between TLP protestors and police.

The TLP workers took 11 policemen, among them a deputy superintendent of police, hostage after an attack on a police station. They were released on Monday after negotiation with the government. The policemen were brutally tortured.

The protesters have taken a 50000 litre petrol tanker with them precluding any massive operation against them for fear of collateral damage.

Tanzimat Ahl-e-Sunnat leader Mufti Muneeb-ur-Rehman has called for a nationwide shutter down strike on April 19, 2021, against the Lahore incident.

The protesters decided to march with the dead bodies of their colleagues to Islamabad, demanding expulsion of French Ambassador, release of all TLP members jailed in various parts of Pakistan and action against Interior Minister Sheikh Rashid.

The protest that started over a cartoon of Prophet Muhammad in France has brought the entire nation to a standstill.
There have been widespread reports of Pakistan Army and police personnel defecting from the forces and openly coming out in support of the protesters.

“The military-intelligence establishment’s pathological obsession with legitimising groups that provide their own warped-version of Islam, has made the foundation of Pakistani society unstable and unpredictable,” top government sources said.

The authorities are trying to enforce writ of the government and present a positive image to the international audience, given its precarious economic condition, the possibility of the ongoing protest looming into a major crisis for Pakistan cannot be ruled out.