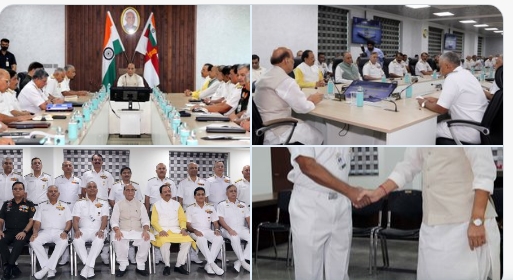 Defence Minister Rajnath Singh on Thursday said that the ongoing Russia and Ukraine conflict has once again highlighted that being self-reliant without dependencies is a vital necessity. Indian Navy, which has been at the forefront of ‘Aatmanirbhar Bharat’ initiative of the government must continue to lead the way and remain a necessary guarantor of India’s Maritime Trade, Security and National Prosperity.

Addressing the concluding session of the Naval Commanders’ Conference in New Delhi, Mr. Singh said, India’s maritime character and its vital geo-strategic location have played a primary role in our growth as a nation and evolution as a civilization. He urged the senior leadership to maintain their focus on futuristic capability development, to ensure that the nation’s maritime power grows in tandem with our economic interests.

Mr. Singh expressed happiness that out of 41 ships and submarines which are on order, 39 are being built in Indian shipyards. He also commended the sea warriors for their professionalism and dedication with which they continue to perform the duty of safeguarding the maritime interests of the nation.

The Minister said, the Indian Navy, over the years, has maintained a high tempo of operations. The Navy has also established a credible and responsive presence in the Indian Ocean Region through Mission-Based Deployments. These deployments have reaffirmed Indian Navy’s position as the ‘Preferred Security Partner’ in the Indian Ocean Region. Mr. Singh said, the Navy has taken numerous initiatives to progress military diplomacy.

These include gifting of two Fast Interceptor Craft to Mozambique, technical support towards refit of ships from Friendly Foreign Countries, Joint Surveillance of Exclusive Economic Zone of friendly nations and conduct of bilateral and multilateral exercises in the last six months. The Minister said, the Indian Navy has also been providing training to foreign personnel in India. He said, over 19 thousand personnel have been trained in the last four decades from over 45 Friendly Foreign Countries.