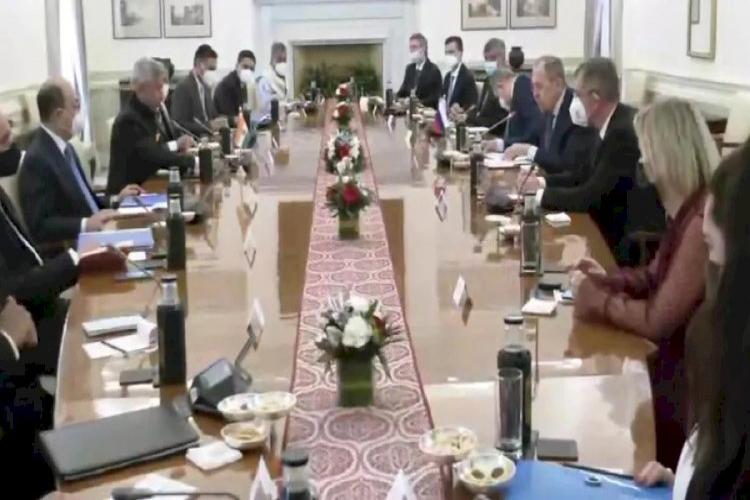 Russian Foreign Minister Sergey Lavrov arrived in India on Thursday for a two-day visit amid the ongoing war with Ukraine . During this, on Friday, External Affairs Minister Dr. Jaishankar ( S Jaishankar ) at Hyderabad House. During this, he held bilateral talks and said that there is a very strong relationship with India, we have also seen difficult times, in future also we will be good friends. At the same time, External Affairs Minister Dr. S. Jaishankar said, ‘Our bilateral relations are increasing continuously in many areas. Our meeting took place in a difficult international environment apart from the pandemic. India has always been in favor of resolving disputes through diplomacy.

Russian Foreign Minister Sergei Lavrov said, “These days our Western allies want to reduce any meaningful international issue to the crisis in Ukraine.” We don’t fight for everything and we appreciate that India is not taking full force of this situation in a unilateral way only. India and Russia have been developing a strategic partnership and that has been our priority. We are certainly interested in balancing the world order. We have enhanced our bilateral relations. Our President has sent best wishes to PM Modi.

Lavrov will meet Prime Minister Narendra Modi today. This is his first visit to India after the military operation launched by Russia on February 24 against Ukraine. It is understood that during this visit, India will discuss the payment system for oil and bilateral trade with Russia.

According to sources, during this period, India can also emphasize on timely supply of S-400 missile system equipment and military weapons from Russia. Lavrov’s visit comes at a time when US Deputy National Security Advisor Dalip Singh and UK Foreign Minister Liz Truss are also on a visit to India. During this, Liz Truss said that it is more important than ever to strengthen ties with India in the context of Ukraine crisis.

India has not yet criticized Russia for its invasion of Ukraine

India is yet to criticize Russia for its invasion of Ukraine and has refrained from voting at UN forums on resolutions condemning the Russian aggression. At the same time, India was absent during the voting on the resolution presented by Russia regarding the humanitarian crisis in Ukraine. This reflects India’s neutral stand on this struggle. Prime Minister Narendra Modi had telephonic conversations with Russian President Vladimir Putin on February 24, March 2 and March 7 since the conflict began. Prime Minister Modi has spoken to Ukrainian President Volodymyr Zelensky twice.