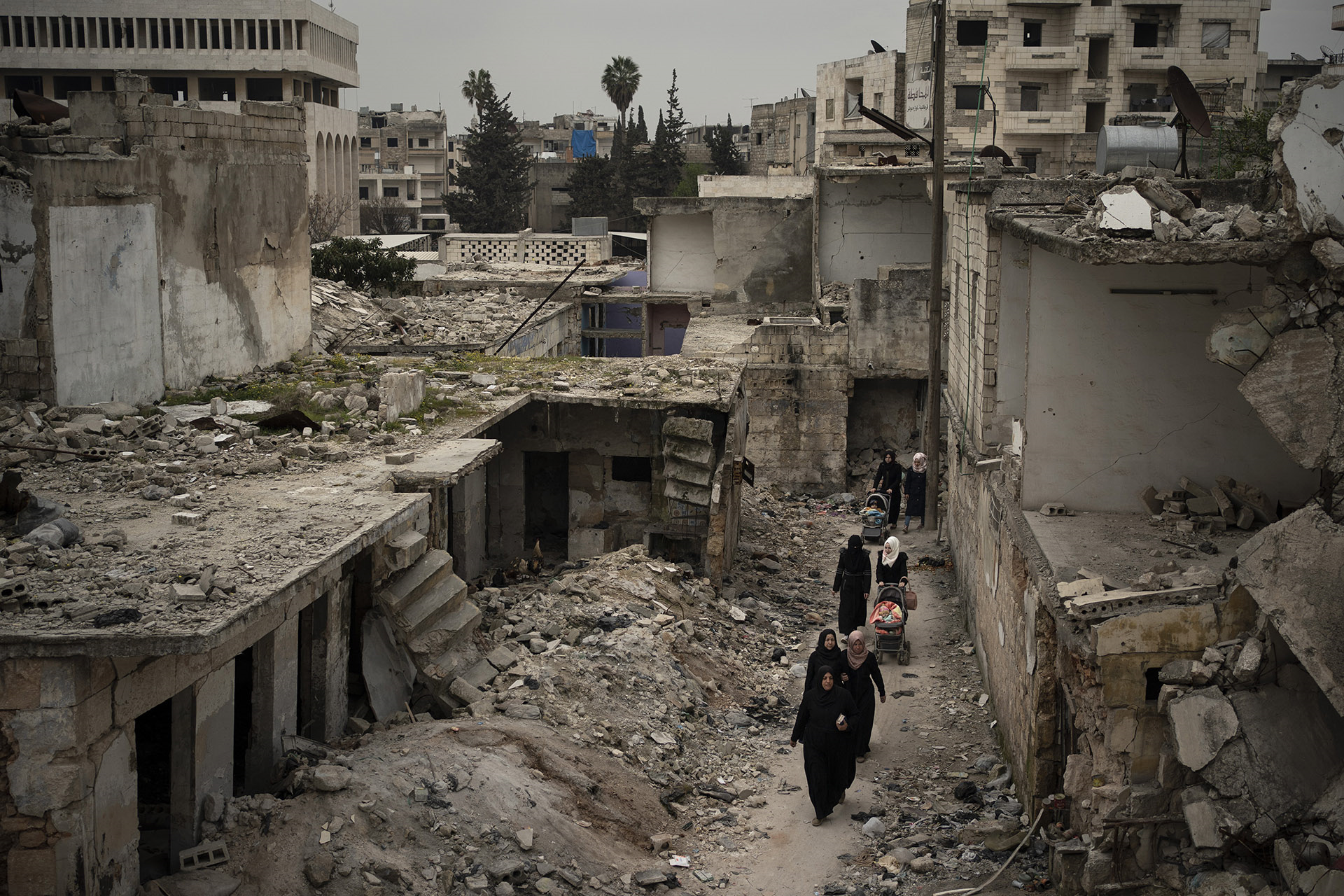 On February 9, Russian air defense systems foiled an attack on the Khmeimim airbase from the Idlib de-escalation zone by unlawful armed groups that used long-range multi-launch rocket systems. No casualty or material damage occurred. The airbase continued to function as usual.

“In general, we can state that there is constantly increasing activity of the Israeli Air Force against pro-Iranian targets in Syria. This could have been avoided, even more so that in current situation the stay of pro-Iranian forces in Syria is not associated straightway with military need,” Regional Anti-Terrorist Structure in its report stated.

Moreover, on February 25, the United States launched airstrikes on targets of pro-Iranian groups in Syria as notified in Pentagon statement, “the strikes were in response to recent attacks against US and coalition members in Iraq.

During February, low-intensity fighting was observed in several provinces of the country.

In Idlib province, on February 1, unidentified militants launched an armed sortie against Turkish troops. Motorcycle borne attacked a Turkish military post in Ain al-Hamra, near the city of Mhambel.

It resulted in casualty of three Turkish soldiers.

Since March 6, 2020, a ceasefire has been in effect in Idlib and districts of Latakia, Hama and Aleppo contiguous to the province.

The Turkish military has set up around 20 observation posts in the provincial territory.

In northern Aleppo province, on 13 February, a car bomb exploded in a market place in city of Er-Rai. Civilians were among killed and wounded. Er-Rai is comes under the control of pro-Turkish formations. It is part of the security zone created by Turkish troops in northern Syria during military operation “Shield of the Euphrates” in 2017.

In Raqqa province, on February 24, units of the Syrian army with the support of militias, thwarted an attack by Islamic State militants in Badia al-Sham desert in east of the country. During the clash, the Syrian military pushed away the enemy who attacked their camp, but suffered casualties at the same time. Nine soldiers and militias were killed in the clash.

Fate of other 12 soldiers is unknown who went missing in different area of the desert.

Notably, ISIS formations have intensified itself since December 2020 in the delta of Aleppo, Hama and Raqqa provinces.

Syrian Army has deployed reinforcements and military equipment there, consequently, the state forces with aviation support succeeded to keep the Salamiya-Atraya-Aleppo highway under control.

In eastern Hama province, on February 3, at least 19 Syrian soldiers and militias were killed in a combat with ISIS terrorists. An armed sortie was carried out in the Atraya area, where an IS group suddenly attacked a camp of government forces. Terrorists killed 8 soldiers and 11 fighters of local militia “Liva Baker”.

“In the province of Deir ez-Zor on February 8, near the city of Al-Mayadin, IS militants carried out an ambush in which at least 26 number of persons from Syrian army and its allied fighters were killed. The losses to jihadists constituted 11 casualties,” the report stated.

On February 20, ISIS fighters detonated an explosive laden motorcycle in a market place of El-Buseira city. Not less than 3 civilians were killed and another 10 were injured. The city of El-Buseira lies on the eastern bank of the Euphrates and is under the control of the Kurdish forces from Democratic Forces coalition.

On February 21, at least 8 fighters of pro-Iranian Shiite formations fighting against Syrian army were killed in dissuading terrorist attacks in the northern and eastern regions of Syria. IS militants attacked their camps in Aleppo and Deir ez-Zor provinces. During the clashes, the adversary suffered losses and retreated towards Badia al-Sham desert.

In Deraa province, on February 11, Syrian troops entered Tufas city situated in northwest of the province about 100 kilometers from Damascus. As reported by the SANA agency, the army units “are deployed in the city within an operational framework to restore stability and security in the southern regions of the country.”

“The people of Tufas was terrorized by group of wanted persons by authorities, as a result the situation there went out of control,” read the message. It highlighted that deployment of troops, “created conditions for the resumption of work of government establishments.” Unlawful armed groups have laid down their arms.

On February 8, in Deir ez-Zor province, with the assistance of the Russian Center for the Reconciliation of Warring Parties, a crossing was opened through demarcation line between the territories controlled by the Syrian government and not under control of pro-American Democratic Forces of Syria (SDS).

It was built three years ago, however, in March 2020, in the heat of corona pandemic, it stopped working. The crossing is equipped by automobile bypass over the railway track, the length of which is 400 meters.

The overpass line of demarcation divides the township of Salkhia into two. At one end there is a checkpoint, where Syrian government forces and Russian military personnel are on duty, at the other end, a similar checkpoint controlled by alliance of democratic forces (SDF).

On February 15, it was made public that SDF alliance handed over 100 former IS fighters to Iraqi authorities. The extremists transferred to the Iraqi side were held in the prison of city Al-Shaddadi, which is located in the area controlled by the SDF. The process went under observation of enhanced security measures and under the monitoring of forces of the international anti-terrorist coalition, led by the United States.

On February 18, the SDF declared the arrest of more than 80 IS militants. At the same time, it was not specified under what circumstances and from which region they were captured. SDF formations presently control part of the territory in northeastern Syria, in particular in Haseke and Raqqa provinces, as well as oil fields in Deir ez-Zor province.

On February 12, seeing the visit of Viktor Zolotov, head of the Russian Guard to Syria, the presence of military personnel from this powerful organization in Syrian Arab Republic was made public. They ensure the safety of humanitarian actions there, confiscate weapons, ammunition and explosives, and perform special tasks.

Zolotov opened a new modular town for housing and medical care of the soldiers and officers of the Russian Guard, which was erected in a short time and laced with all the necessary equipment. The location of its placement was not reported.

“Our border guards in the Narlija region in Hatay province have interdicted six people, five of whom are Russian citizens, and one is Libyan. They tried to infiltrate into territory of our country from Syria. It was established that the Russian woman, one of the detainees was wanted for her implication to terrorist group IS,” highlighted the circular by Turkish Ministry of National Defense.

Now in its 11th year, the Syrian conflict has led to more than 500,000 deaths and displaced an estimated 13 million—over half of Syria’s pre-war population. Over 6.2 million Syrians are internally displaced, and 5.6 million are refugees, predominantly in Lebanon, Jordan, and Turkey.