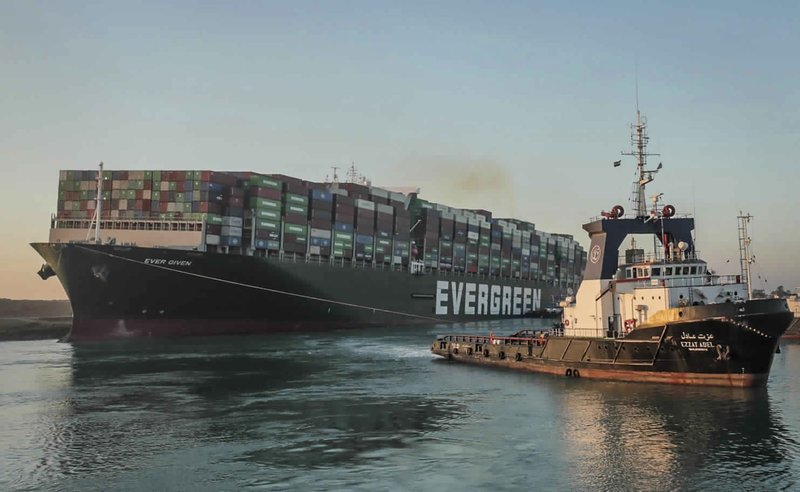 In this photo released by Suez Canal Authority, the Ever Given, a Panama-flagged cargo ship, is pulled by one of the Suez Canal tugboats, in the Suez Canal, Egypt, Monday, March 29, 2021. Engineers on Monday “partially refloated ” the colossal container ship that continues to block traffic through the Suez Canal, authorities said, without providing further details about when the vessel would be set free.
IDN Correspondent From Suez, Egypt March 30, 2021
Updated on December 23, 2021 3:52 pm

Shipping resumed on late Monday in Egypt’s Suez Canal after salvage teams freed the colossal container ship stuck for nearly a week in the canal. The tugs refloated the giant container ship which had been blocking the channel for almost a week.

It had caused a huge build-up of vessels around the waterway. The crisis had clogged one of the world’s most vital waterways and halted billions of dollars a day in maritime commerce.

Suez Canal Authority (SCA) chairman Osama Rabie told reporters that with the 400-metre-long Ever Given dislodged, 113 ships were expected to transit the canal in both directions by Tuesday morning. Rabie said that a backlog of 422 ships could be cleared in three and half days.

It was a flotilla of tugboats, helped by the tides, wrenched the bulbous bow of the skyscraper-sized Ever Given from the canal’s sandy bank. It had become jammed diagonally across a southern section of the canal, the shortest shipping route between Europe and Asia, on March 23.
Approximately 30,000 cubic metres of sand had been dredged to refloat the 224,000-tonne container ship and a total of 11 tugs and two powerful sea tugs were used to pull the ship free.

After it was refloated, CEO of Boskalis, the salvage firm hired to extract the Ever Given said: “We pulled it off!”
He said, “I am excited to announce that our team of experts, working in close collaboration with the Suez Canal Authority, successfully refloated the Ever Given.”

Evergreen Marine Corp., a Taiwan-based shipping company that operates the ship which is leasing the Ever Given, said Ever Given sailed to the Great Bitter Lake, a wide stretch of water halfway between the north and south ends of the canal, for inspection.

“The ship was ready for limited navigation after an initial inspection and not a single container was damaged, but a second investigation will be more precise and if it was affected it will show,” Rabie said.

Egyptian President Abdel Fattah al-Sisi said Egypt had ended the crisis and assured resumption of trade through the canal.