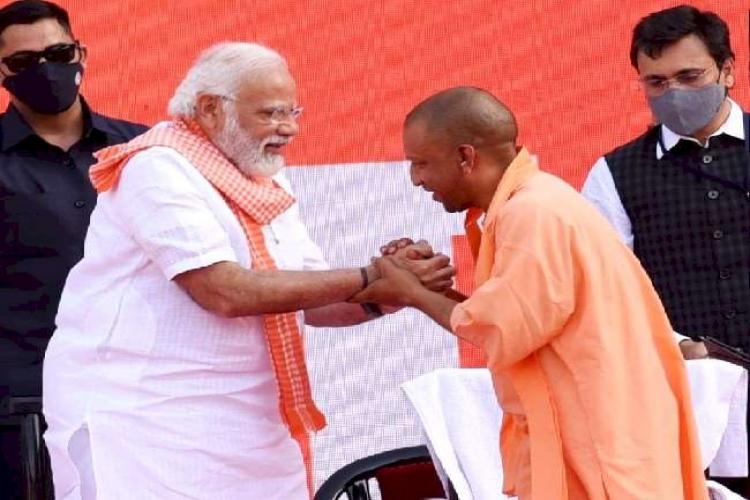 Born on June 5, 1972, in a normal family of Panchur Yamkeshwar village in Pauri Garhwal, Uttarakhand, Yogi Adityanath’s life journey was unusual. The son, who was named Ajay by father Anand Singh Bisht, grew up on the path of invincible resolution at a very young age.

Yogi Adityanath became a disciple after reaching Gorakhnath temple in 1993 and joined the tradition of Nath sect, he may have taken over the political legacy of Guru Mahant Avadyanath as Gorakhpur MP in 1998 or he became Gorakshapeethadhishwar as successor in 1994, he is a Yogi of Dharma and of Rajdharma. He proved to be an invincible karma yogi.

Yogi Adityanath, who has created the history of being elected MP for five consecutive terms from the same seat, has also created history after 37 years in the politics of Uttar Pradesh.

Inspired by the nationalist ideology since childhood, Yogi was associated with the Ram Mandir movement. It was during the Ram temple movement that he came in contact with the hero of this movement, Gorakshpeethadhishwar Mahant Avedyanath. After graduating from Garhwal University, he decided to become a monk.

Yogi Adityanath, who took initiation of the Nath sect at the age of just 22, took over the responsibility of the Math on February 15, 1994, as the successor of the Gorakshapeeth. Yogi Adityanath, who has so far raised the flag as the Pithadhishwar, had stepped on the path of politics long ago.

He also inherited the political responsibility from the Gorakshapeeth. His grandfather, Guru Brahmlin Mahant Digvijaynath, once represented the Gorakhpur parliamentary constituency. His mentor Brahmlin Mahant Avadyanath was a four-time MP from Gorakhpur parliamentary constituency and five-time MLA from Maniram assembly constituency. It was only after winning the Gorakhpur Lok Sabha election in 1996 that Mahant Avadyanath had announced that Yogi would take over the succession of his politics.

After this, Yogi contested from Gorakhpur in the 1998 Lok Sabha elections and became the youngest (26 years) MP at that time in the twelfth Lok Sabha by winning. Since then he has won parliamentary elections for five consecutive terms till 2014.

In 2017, when BJP’s thumping majority government was formed in the state, the BJP’s eyes fell on this karma yogi. He was made the Chief Minister and took oath on 19 March. He ruled for five years as a strict administrator and welfare chief minister. The result of that is that this time also in the assembly elections, BJP formed the government with full majority.

Contested and won the assembly elections for the first time: After being made the Chief Minister in 2017, Yogi Adityanath was nominated as a member of the Legislative Council, but when the party was contesting on his face this time, Yogi himself decided to enter the fray. . He contested from Gorakhpur Sadar seat and registered a big victory.

Major achievements of the first term

In Ease of Doing Business, UP has been ranked second from 14th ranking.

Made the state number one in about 50 public welfare schemes of the Centre.

Due to strong law and order, not a single riot took place in the state in five years.

Four lakh crore rupees were invested during his tenure.