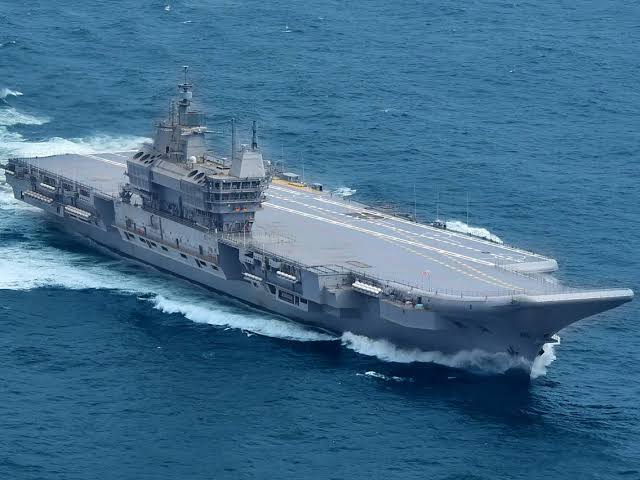 The geographic location of India makes the oceans and seas extremely vital for a variety of apparent reasons. A staggering proportion of India’s foreign trade is sea-borne and a brief look at our history will reveal that India’s unsettled disputes with its land neighbours will necessitate its continued dependency on the maritime domain for crucial requirements in the decades to come. Further, most of the commercial and industrial hubs of our country are located in close proximity from the coastline which makes them extremely vulnerable to hostile operations by an adversary.

To ensure unimpeded utilisation of high seas for free commerce, a stronger military deterrent force is required, and the core of this type of force is the ability to project power at sea. The most recognisable icon of maritime power fulfilling this requirement since the end of World War II have been the Aircraft Carriers.

The emerging world order will surely involve substantial geopolitical competition, wherein the possibility of military conflicts cannot be discounted. The growing forays of the PLA Navy in the Indian Ocean, aided by its efforts in acquiring bases in the region, constitutes an alarming development. The Indian Ocean is gradually emerging as a potential flashpoint between India and China in their competition for resources, status, influence and power. Coupled with India’s expanding vital interests, such a regional environment will necessarily require a credible multi-carrier capability for its Navy. The Indian Navy’s maritime strategy has evolved from “Freedom to Use the Seas” (2009) to “Ensuring Secure Seas” (2015), indicating the aspirations for naval supremacy in the Indian Ocean. Due to its aspirations of naval dominance, the Navy has been more vocal about the induction of aircraft carriers which are the most effective instruments of sea control. Similarly, China which has traditionally been a submarine intensive force and had never operated an aircraft carrier till a decade ago, is poised to operate three of them in the next couple of years and possibly ten by 2049.

The naval operations undertaken by an aircraft carrier have been traditionally structured around the concept of a Carrier Battle Group comprising of the aircraft carrier, its escort ships and the support ships. The primary strategic roles that emerge for a Carrier Battle Group from various naval operations undertaken till date are to undertake both soft and coercive diplomacy in support of national interests and project power far beyond own shores to influence both military operations and political response of the adversary. Besides power projection, visit by an aircraft carrier to a port of a foreign country for good will or Operational Turn Around not only serves to show presence of flag, but is also a major diplomatic and political statement. It needs no emphasis that building and operating an aircraft carrier also showcases the maritime capability of any nation. Besides air defence of the fleet ships deployed deep in sea and undertaking strike on enemy shipping and shore targets, an aircraft carrier is also a good Command and Control platform due to excellent communication facilities and high level of network centric operations onboard. It is also a suitable platform in humanitarian assistance and disaster relief operations such as evacuation of non-combatants from a conflict zone, providing medical aid in natural disasters among others.

A Carrier Battle Group is a credible naval asset that can provide comprehensive protection to the merchant shipping carrying strategic items, in the event of a military conflict. Further, it can influence affairs on land by means of protection of Sea Lines of Communication (SLOC), especially for a maritime nation like India relying heavily on sea borne trade. Integral naval aviation is also essential for defence of India’s far-flung island territories, particularly of the Andaman and Nicobar Islands (A&N) that lie more than 1,000 km from the Indian mainland. Future conflict in the maritime domain would entail the requirement of credible power projection and economic blockade against Pakistan and SLOC interdiction against China or both at the same time. No other naval platform but a credible CBG centered around an aircraft carrier can enforce these. Further, a carrier battle group can be very effective in opening a second or third front, so as to influence the land battle.

It is certain, that, the Indian Navy will be facing at least two formidable tasks; one in the Arabian Sea and the other in the Indian Ocean. The first one will be to thwart any attempt by Pakistan to disrupt India’s crucial SLOCs to and from the Persian Gulf, the single aim around which the Pakistan Navy is being modernized and shaped up. The second would be to effectively contain China’s determined efforts to establish a say in the Indian Ocean region. These tasks will demand nothing short of a capacity to undertake decisive military operations at sea, at distances beyond thousands of kilometers and the means to sustain them through a definite period. Such operations will leave no option other than an organic air power at sea onboard an Aircraft Carrier to perform crucial roles on which the very survival of the fleet may depend in the days to come.

India’s favourable geography makes Carrier borne airpower a particularly potent instrument in dealing with any future Chinese aircraft carrier deep in the Indian Ocean. As a rule, therefore, the farther away military action occurs from the Indian peninsula, the more indispensable carrier aviation becomes. In any major crisis or conflict involving China, it is highly possible that Indian Air Force (IAF) assets are heavily tasked towards air defense and ground attack along the disputed Himalayan border which is considerably far away from our maritime frontiers. Even if IAF assets were available, Carrier-based capabilities deep in the seas would be highly indispensable because they would complicate CCP Navy’s operations by forcing the Chinese fleet to guard against attacks from its seaward side, even as its Army coped with landward threats. To deal with the dangers posed by Chinese naval presence in the Indian Ocean, Indian Navy would require land-based airpower and nuclear attack submarines as a complement to its aircraft carriers and not as a substitute. The logical way ahead is not to examine the desirability of aircraft carriers relative to the alternatives, but rather to identify how to develop a credible aircraft carrier capability that deters the adversary.

It is rather evident that the emerging geo-politico-strategic developments in the Indian Ocean region will leave India with no option but to rely on superlative air power at two theatres in the Indian Ocean simultaneously. Accordingly, the Navy has been long advocating the need to operate at least three Aircraft Carriers to ensure that at any time two Carrier Battle Groups are operational, one in each maritime theatre. It is pertinent that China operates two Carriers presently and its third carrier is likely to join active service shortly. Further, China aims at building a fleet of ten carriers by 2049. Therefore, there is a pressing need to maintain a balance of power in the region.