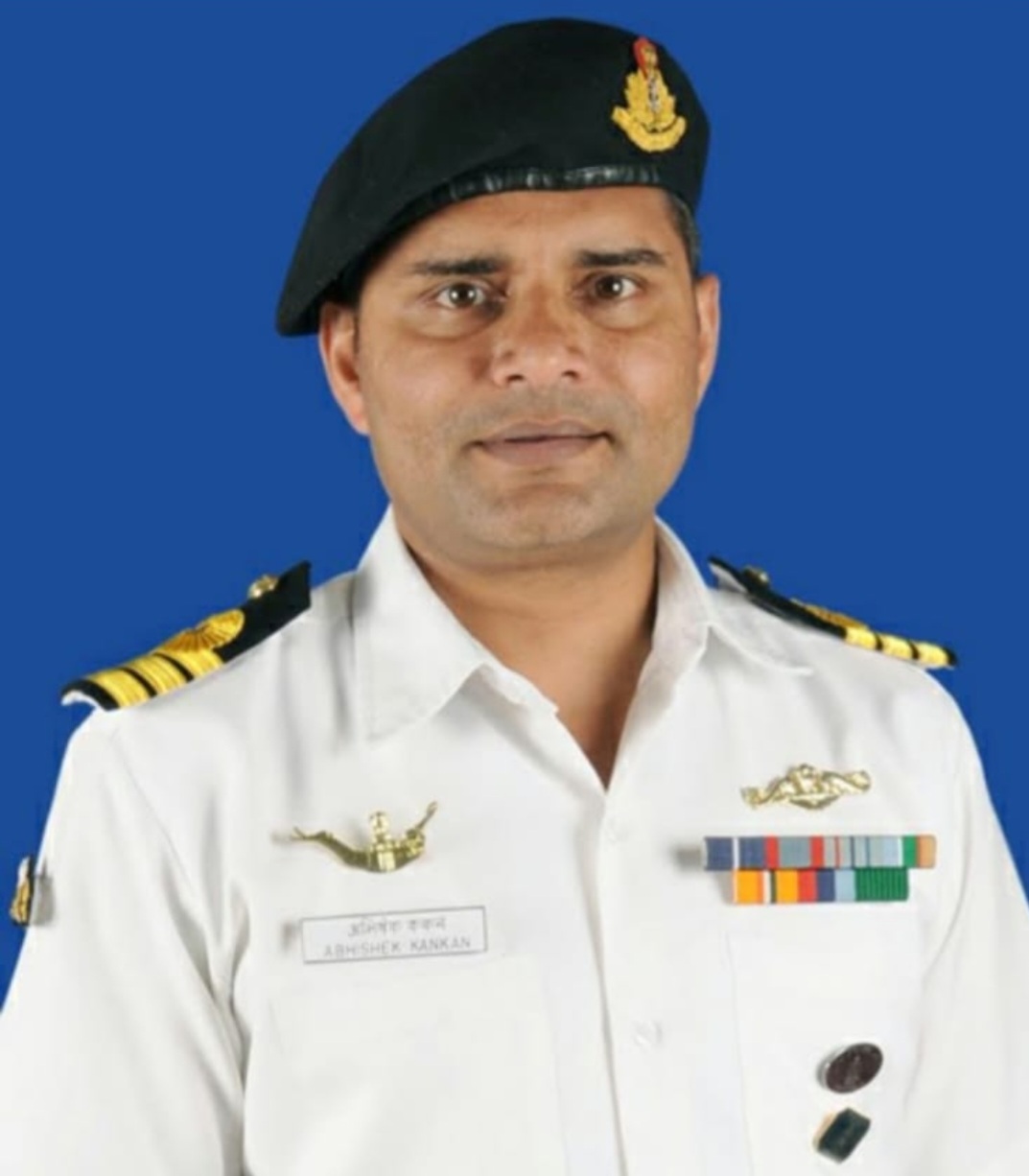 Sir Winston Churchill’ quote “Of all the branches of men in the forces, there is none which shows more devotion and faces grimmer perils than the submariners” correctly show cases the tenacious and tough life that Commander Abhishek Kankan, Naosena Medal (Gallantry) led in the Indian Navy while serving India.

Born on 08 February 1971 in Kanpur to an illustrious family to Shri Subhash Kankan a food specialist who worked in the Ministry of Industries and Smt Premlata Kankan, a home maker, Abhishek as Ashu is affectionately called did his schooling from the Rashtriya Indian Military College, Dehradun and The Army Public School, Dhaula Kuan, New Delhi.

After passing Class XII, Ashu joining Indian Naval Ship (INS) Shivaji in Lonavla for pre-commissioning training of 4 years to become an Officer in the Indian Navy. Abhishek passed out of INS Shivaji on 04 Decenber 1992 and was commissioned as a Sub-Lieutenant in the Engineering branch of the Indian Navy.

During his stint in Jammu & Kashmir as part of for Operation Rakshak, his ‘Prahar’ (team) got the Indian Navy it’s first ‘Kill’ in the Kashmir Valley, when the Prahar killed a Hizbul Mujahiden terrorist who was the Area Commander of Kangan area on 01 Aug 1997.

His Prahar was deployed in Gandharbal area as lots of activity of terrorists was spotted with help of Direction Finders. On the fateful night, Lt Tilakraj Thakur and Lt Abhishek Kankan lead two separate Prahars and established an ambush just outside a village.

Lt Thakur had positioned his Prahar in a dilapidated house, while Lt Kankan established in a highly vegetated area. An encounter happened late night in which firing took place between terrorist and Lt Thakur’s Prahar. But the terrorists could not be traced post firing.

Through the night, cordon and search was carried out against the lingering invisible terrorists. Ultimately, early morning, the terrorist was eliminated. For this act of bravery, Lt Abhishek Kankan was awarded the Chief of Naval Staff’s Commendation Card in 1998.

A few years later, Ashu during appointment as Engineer Officer aboard INS Sindhurakshak, an EKM Submarine, was gearing up for the forthcoming operations cycle after her Short Refit (SR). While the submarine was fuelling on 30 Jun 2001, at about 1300 hours, the sea water
compensating line of the underwater fuel ballast got choked.

The tank held about 12 tons of fuel which had to be de-fuelled and the tank cleared for sea. However, since the compensating line was choked the de-fuelling of the tank was not possible. The only evident solution was to open the manhole cover and pump out the tank using a submersible pump. This was however, not feasible in view of the concave shape of the tank.

The problem thus entailed an emergency dry docking of the submarine which would have led to the rescheduling of the dry docking of other ships/submarines. It was at this juncture Lt Abhishek Kankan combining his professional acumen, skill, and horizontal thinking came up with an innovative solution.

He designed and got manufactured a manhole cover with a hole cut in its centre with 2 flanges welded on to its sides. One flange was to supply compensating sea water to the tank for defueling and the other to ensure that the compensating water reached the bottom of the tank through a flexible hose thus avoiding emulsification, contamination and wastage of fuel. After blowing the 9(S) tank and ensuring that all precautions necessary for entering enclosed spaces were taken, the officer in keeping with the highest traditions of the Navy, led from the front and entered the fuel ballast tank alone with utter disregard to his personal safety.

This is the first instance of a person entering a fuel ballast tank in afloat condition. He physically examined the compensating line, tapping all along its length however it continued to remained choked. He then along with the help of another sailor removed the flange of the pipe inside the tank on the pressure hull, thus ensuring that the fuel ballast tank could get compensated and the submarine was sea worthy to meet the immediate requirement of sailing on 07 Jul 2001.

On returning to harbour at 1800 hrs on 12 Jul 2001, Ashu took it upon himself as a personal challenge to rectify the problem and make the submarine fully available. It is noteworthy to mention here that in spite of Fuel Ballast Tank 9(S) being very slippery with fuel, stifling and suffocating conditions at the bottom, the onerous task was accomplished by Ashu with ease and alacrity.

Lt Abhishek Kankan showing utter disregard to his personal safety and comfort, beyond the call of duty and personal initiative endangered himself by entering such enclosed space. The innovative idea of manufacturing a manhole cover with two flanges saved the Navy and the nation a considerable amount of money and established a precedence for solving similar defects in the future. Abhishek was awarded CNS Commendation for second time in 2001.

Later Lt Cdr Abhishek Kankan went on to climb Mt Everest. He remained calm, courageous and cheerful as the team braved swift winds, avalanches, rock falls and on some occasion’s deaths of other climbers as they struggled every inch of the way to the Mt Everest summit. The officer’s undaunted performance on the mountain saw him being entrusted with the duties of logistics management for the climbing team.

The officer displaying excellent acumen for high altitude climbing, perseverance, resolve and tenacity reached the summit of Everest at 0800 hrs on 19 May 2004. He was awarded Naosena Medal (NM) by Dr APJ Abdul Kalam, the Hon’ble President of India on 26 Jan 2005.

Cdr Abhishek Kankan, NM is probably the only naval officer in the world to have served in the Special Forces, been a submariner, a mountaineer, a deep sea diver and a marine engineer.

Abhishek now works in the corporate and does social service for Veterans.

Our salute and respect to Cdr Abhishek Kankan, NM (Retd) who is truly the Pride of India.

For a perfect allrounder that Cdr Abhishek Kankan, NM (Retd) has been in being a submariner, a deep-sea diver and a mountaineer, the quip of Mehmet Murat Ildan aptly defines him “Just like the submarines, deep men are also unaffected by the storms”.

Lt Col JS Sodhi (Retd)
The writer who retired from the Corps of Engineers of the Indian Army is an alumnus of NDA, Khadakwasla and IIT Kanpur. He is a M.Tech in Structures has also done MBA and LL.B and is a prolific writer and a public speaker. He has been featured in the World Book of Records, London and the India Book of Records for his media contributions. The writer Tweets and Koos at @JassiSodhi24. The views expressed are personal.