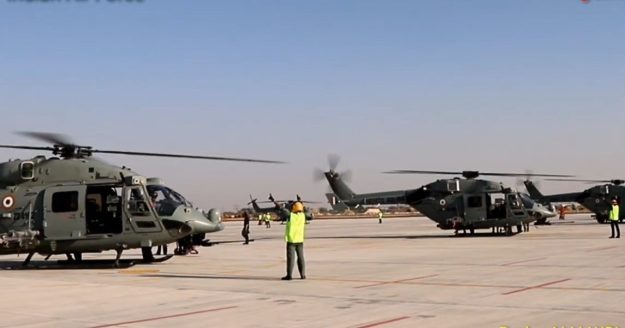 Three Indian Air Force Units were awarded Chief of Air Staff Unit Citations on the occasion of 89th Air Force Day for carrying out operations in Eastern Ladakh during border dispute with China.

The 47 Squadron was formed on December 18, 1959 and is presently equipped with the MiG-29 Upgrade aircraft. After the pre-emptive strikes by the IAF on February 26, 2019, the Squadron was deployed for the Air Defence role.
The Squadron flew extensively and maintained a constant vigil to ensure that there were no misadventures by our adversaries.

The Squadron also undertook the first overseas deployment by a Mig-29 UPG aircraft when it participated in Ex Eastern Bridge V with the Royal Oman Air Force, said IAF in a press release.

In May 2020, the Squadron was deployed for Air Defence as well as Air to Ground operations in the Northern sector, and carried out extensive operations at high altitude.

The 116 Helicopter Unit was formed on August 1, 1967. The unit is equipped with the Advanced Light Helicopter Mark IV (ALH Mk IV) Rudra. After the pre-emptive strikes by the IAF on Feb 26, 2019, the unit was deployed in the forward bases of South Western Air Command AOR to counter threats of slow-moving aerial platforms.
In May 2020, after the Galwan skirmish, the unit was deployed for offensive operations at a high-altitude airfield in the Ladakh area.

The Unit quickly established the first ever high-altitude Attack Helicopter Detachment in the region and executed day and night operations, including Air to Ground weapons delivery at high altitudes.
Operating the indigenous state of the art Rudra, the unit continues to achieve important milestones for the Indian Aviation Industry.

The 2255 Squadron Det is a frontline OSA-AK-M, Surface to Air Guided Weapon Squadron of the IAF which is located in Kashmir AOR with the role of ensuring Air Defence of VA/ VPs in Kashmir and Ladakh sectors, said IAF.
The Squadron was mobilised for Air Defence activation in Ladakh in response to the Galwan standoff in the last week of June 2020.

Since then, the Squadron has undertaken various innovations to sustain serviceability and reliability of its equipment. This has enabled it to maintain its Operational Readiness in harsh climatic conditions, even through the harsh winter of Ladakh.