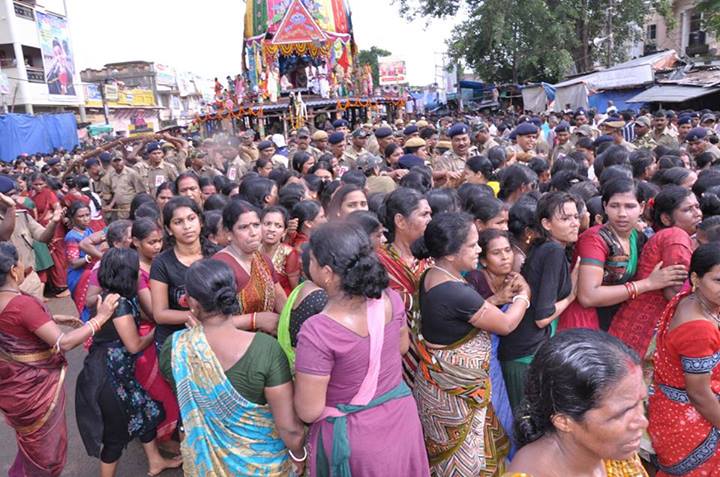 Known as Odisha’s Dwitiya Srikhetra, Baripada hosts the second most popular Rath Yatra (Car Festival) in the state after Puri. It is a 13-day celebration here. The temple of Lord Jagannath at Baripada is known as Hari Baladev Jew temple. Built by Shri Baidyanath Bhanj in 1575 A.D. on the same architectural principles of Kakharua Baidyanath temple, the temple stands as a symbol of the religious fervour of the erstwhile Bhanja rulers of Mayurbhanj. It is made of laterite stone with exquisite designs engraved in the walls. It has height of 84′-6″.

A big boundary wall encircles the temple which is a replica of that of Lord Jagannath temple at Puri. An inscription on the temple wall states that in the year 1497 of the Saka Era this temple was built by Baidyanath Bhanj.

There goes a saying that when Maharaja Baidyanath Bhanj went to Puri in royal grandeur, the Gajapati of Puri refused permission as it was display of higher status quo over the ‘Thakur Raja of Puri’. The prevailing custom then was that the devotees to Puri will come as common man without showing of any supremacy over the Gajapati ‘who is Chalanti Vishnu Designate’. The Maharaja went in penance near Atharnala, on the outskirts of Puri.

In a dream, he was instructed by Lord Jagannath to construct a temple in Baripada. Showing respect to wishes of Lord Jagannath, the Maharaja got constructed the majestic temple at Baripada.

Like Puri, all the rituals for Lord Jagannath, Lord Balabhadra and Devi Subhadra are performed here at Baripada. The Bhanja Rulers, whose royal patronage in the field of architecture was at par excellence, would be remembered for their magnificent offering to Lord Jagannath in getting built the Jagannath temple prototype of Puri.

This temple is provided with Vimana, Jagamohan and Nata Mandira. Besides the presiding deities, there are as many as seventeen Bedha deities consecrated in the temple. The Jagannath temple compound is provided with small cells in which the images of different religions find place.

Every year the Rath Yatra is celebrated on the day after the day on which Car Festival is celebrated at Puri. On the first day, Pahandi Bije of the Trinity is done and on the second day the chariot of Lord Balabhadra known as Taladhwaja is pulled first followed by Devidalana of Devi Subhadra. Pulling of Devidalana is stopped in the middle of badadanda in the evening and resumes the next day. Next day Devidalana and Nandighosa of Lord Jagannath are pulled to Gundicha temple by devotees. The same process is followed during Bahuda, the return journey

During these nine days, the small township of Baripada wears a festive look with three gigantic chariots of Lord Jagannath, Lord Balabhadra and Devi Shubhadra, criss-cross of light and thronging of large number of devotees coming from different parts of this district as well as from the neighboring districts and the states.

The Nine days festival on Badadanda fills the heart and mind of the devotees with religious sentiments as their faith goes like this- ‘touching the rope of Ratha of Lord Jagannath would mitigate the pain of rebirth and immortal soul would mingle with great soul of greatest creator of this Universe’. Whatever may be the truth behind it, Ratha yatra or Ghosha Yatra of three deities are performed with religious thoughts and enthusiasm which is simply beyond description. The construction of these huge chariot begins on the Akshaya Trutiya (Shukla Trutiya of Baishakha) day.

However, what puts Baripada on the top of the chart relating to Rath Yatra celebrations is perhaps the association of women with the festival. While the buzz around women empowerment is catching up with the active participation of the self-help groups across the state, Baripada was there to lead the path, decades ago.