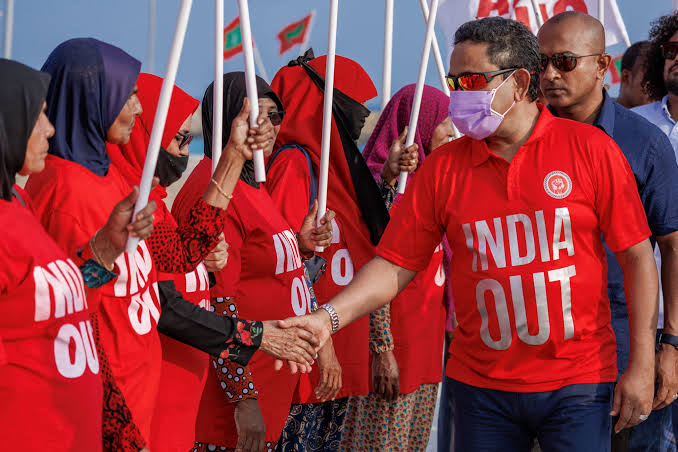 Snubbed by a Presidential decree on 21 April 22, “India Out” campaign has been banned in Maldives. The National Security Council of Maldives has unanimously termed the campaign a “threat to national security” thereby tightening the leash on a politically fuelled gimmick of ex-President and leader of opposition Abdulla Yameen Abdul Gayoom – aimed at collecting votes in the ensuing Presidential election. Despite his failed efforts to upset bilateral equations, of late, India- Maldives relations have been reinforced by visits of Dr S Jaishankar in March and Indian Navy Chief Admiral R Hari Kumar in April this year. The Admiral during his visit unveiled the first navigational chart jointly produced by India and Maldives and handed over hydrography equipment to consolidate organic hydrography capabilities of MNDF. He also presented a consignment of engineering equipment for further sustenance of MNDF ships and reiterated India’s commitment to enhance maritime cooperation with Maldives for a safe and secure Indian Ocean Region.

An opposition crying foul on matters of national security and blaming the ruling government’s stance prior to an upcoming election is too textbook-ish a plot for modern day voters, who are well-equipped with internet in their hands and are more aware of the benefits and losses of international relations. The five-year Yameen regime from 2013- 18 marked with water crisis, internal turmoil and dwindling international relations ended in 2018, thus causing damages that the country is still recovering from. These five years left Maldives in a Chinese debt-trap of 1.4 Billion dollars, a state of emergency, as well as large scale human rights violations including targeted killing of journalists who dared to expose the situation on ground. Members of the government – both executive and judiciary were also jailed during this period.

The China-inclined opposition party, headed by Maldives’s ex-President Yameen, had approved various infrastructure projects accruing loans from China that may end up pushing the island nation into an unpayable debt-trap. Dreaded across developing nations in the IOR and Central Asia, the debt-trap that accompanies China’s ambitious Belt and Road Initiative enables stronger political and financial foothold in the country. The over-dependence on Chinese sourced- funds leads to compounding loans. What initially appears like a helping hand in smaller and vulnerable economies, manifests into a more calculated strategy to gain a foothold in the economy followed by a more aggressive intrusion into the national political and strategic arena.

A finer look into the process of Sri Lanka’s economic crisis next door will provide a textbook step by step tutorial of how the Chinese debt trap diplomacy spoils a developing economy. The government-backed Chinese companies crept into the Sri Lankan infrastructure, imports, urban developments and notoriously into the Hambantota port project. The development of the Hambantota project was initially funded by loans from the Chinese Exim Bank. However, due to incurring heavy losses, it had to be leased back to the China Merchants Holdings Company Ltd at a whopping sum, pushing the country into even bigger debts along with the loss of management of the harbour. The country is struggling with riots, demonstrations, political turmoil and want of fundamental consumer products.

However, in dire crisis, it has been India that has stepped up to help. Firm on its ‘Neighbourhood First’ policy, it has extended $ 1 Bn credit facility for import of food and essential commodities. Sri Lanka has also been supported with large shipments of rice, sugar, wheat, medicines, kerosene, diesel and petrol from India to support the economy already struggling to procure essentials amidst rising inflation. India has always maintained a development-based diplomacy respecting the sovereign rights of its neighbours whilst ensuring stability, security and development in the region.

Maldives and Sri Lanka share many similarities. Both the economies rely heavily on imports, consumer goods from neighbouring countries and depend profoundly on India for tourism, healthcare, higher education and defence infrastructure and training. Therefore, Maldives will have to be cautious of erring on the wrong-side. Before allowing history to repeat itself so soon, it is important for the people of Maldives to not let the Chinese firms take control of their infrastructure, public facilities, the economy and subsequently the political set-up. The country must draw serious lessons from Sri Lanka’s turmoil and take action in time to avoid not only landing in an economic mayhem, but also leasing out their strategic and political freedom in exchange.