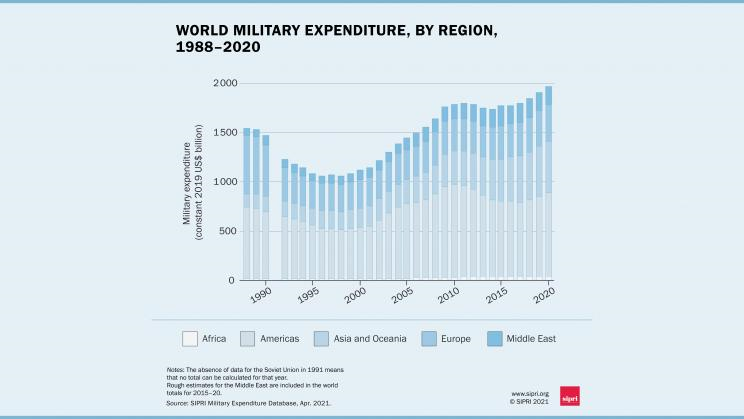 Even though the world was fighting a war with Covid-19 pandemic, total global military expenditure rose to $1981 billion last year, an increase of 2.6 per cent from 2019, a Swedish based military research body said on Monday.

In a report, the Stockholm International Peace Research Institute (SIPRI) said that the five biggest spenders in 2020, which together accounted for 62 per cent of global military expenditure, were the United States, China, India, Russia and the United Kingdom. Military spending by China grew for the 26th consecutive year.

Even when global gross domestic product (GDP) shrank by 4.4 per cent — October 2020 projection by the International Monetary Fund, largely due to the economic impacts of the Covid-19 pandemic, there was a 2.6 per cent increase in world military spending.

This was the biggest year-on-year rise in the military burden since the global financial and economic crisis in 2009.

Even though military spending rose globally, some countries explicitly reallocated part of their planned military spending to pandemic response, such as Chile and South Korea. Several others, including Brazil and Russia, spent considerably less than their initial military budgets for 2020.

‘We can say with some certainty that the pandemic did not have a significant impact on global military spending in 2020,’ said Dr Diego Lopes da Silva, Researcher with the SIPRI Arms and Military Expenditure Programme.

‘It remains to be seen whether countries will maintain this level of military spending through a second year of the pandemic.’

Further, in 2020 US military expenditure reached an estimated $778 billion, representing an increase of 4.4 per cent over 2019.

As the world’s largest military spender, the US accounted for 39 per cent of total military expenditure in 2020. This was the third consecutive year of growth in US military spending, following seven years of continuous reductions.

‘The recent increases in US military spending can be primarily attributed to heavy investment in research and development, and several long-term projects such as modernizing the US nuclear arsenal and large-scale arms procurement,’ said Alexandra Marksteiner, a researcher with SIPRI’s Arms and Military Expenditure Programme. ‘This reflects growing concerns over perceived threats from strategic competitors such as China and Russia, as well as the Trump administration’s drive to bolster what it saw as a depleted US military.’

In the meantime, China’s military expenditure, the second highest in the world, is estimated to have totalled $252 billion in 2020.

“China’s spending has risen for 26 consecutive years, the longest series of uninterrupted increases by any country in the SIPRI Military Expenditure Database,” the report stated.

‘China stands out as the only major spender in the world not to increase its military burden in 2020 despite increasing its military expenditure, because of its positive GDP growth last year,’ said Dr Nan Tian, SIPRI Senior Researcher. ‘The ongoing growth in Chinese spending is due in part to the country’s long-term military modernization and expansion plans, in line with a stated desire to catch up with other leading military powers.’

France, for example, the 8th biggest spender globally, passed the 2 per cent threshold for the first time since 2009.

‘Although more NATO members spent more than 2 per cent of GDP on their militaries in 2020, in some cases this probably had more to do with the economic fallout of the pandemic than a deliberate decision to reach the Alliance’s spending target,’ said Lopes da Silva, Researcher with the SIPRI Arms and Military Expenditure Programme.

Russia’s military expenditure increased by 2.5 per cent in 2020 to reach $61.7 billion. This was the second consecutive year of growth. Nevertheless, Russia’s actual military spending in 2020 was 6.6 per cent lower than its initial military budget, a larger shortfall than in previous years.

Military expenditure in sub-Saharan Africa increased by 3.4 per cent in 2020 to reach $18.5 billion.

The biggest increases in spending were made by Chad which saw and increase of 31 per cent, Mali witnessed 22 per cent, Mauritania by 23 per cent, and Nigeria by 29 per cent, all in the Sahel region, as well as Uganda by 46 per cent).

Military expenditure in South America fell by 2.1 per cent to $43.5 billion in 2020. The decrease was largely due to a 3.1 per cent drop in spending by Brazil, the subregion’s largest military spender.

The combined military spending of the 11 Middle Eastern countries for which SIPRI has spending figures decreased by 6.5 per cent in 2020, to $143 billion.